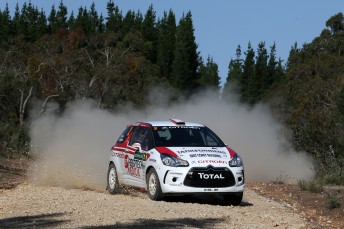 Evans powered through the opening day

After four stages at Scouts Rally SA Eli Evans has continued to expand his points lead over title rival Molly Taylor to 39 points.

The short Heat starting on Friday afternoon, with the fourth and final stage of the day held in full darkness. Molly Taylor started with determination, claiming the opening stage win by 1.9 seconds over Tony Sullens.

Sullens himself was in fine form, bouncing back from the hydraulic issues that had blunted his charge at the last event out in Coffs Harbour, while Citroen teammate Evans was back in third.

On the very next stage though it was all to come unstuck for Sullens, finding his Citroen DS3 stuck in second gear. That allowed Taylor to once again claim the stage win, opening a small but important buffer of 3.5 seconds, Evans was in second.

On the third and final day light stage it was the turn of Steve Mackenzie to pounce, surging to a strong stage win in his Ford Fiesta ST, while Taylor struggled and dropped from the lead back to second behind Evans.

With just the night stage to run Evans made some setup changes to his Citroen, hoping to benefit from his road position, and looking for better turn in on corners. The changes worked, by the stage end he had blitzed a time 17.4 seconds faster than Taylor.

“Molly and Steve put some pressure on us early today, it was great to have a fight on our hands. But on that last stage we managed to build a gap and take the win for today.

“We now have a 39-point advantage, but there are 50 points on offer tomorrow so if were to have a problem it’s highly likely Molly could be in the lead.”

Taylor’s Renault Clio developed an issue where it would drop revs during gear changes. “I don’t know what’s going on,” said Taylor.
“Particularly in this car if you lose all your revs then you lose your momentum and you have to build it back up again. It just kills you right on the exit of the corners.”

In the 4WD’s the star of the morning’s ARMOR ALL & STP Power Stage, Marcus Walkem, was quickly back up to speed, claiming three of the day’s four stages to finish 35.1 seconds up on Mick Patton.

The only downside for the Tasmanian was seeing Harry Bates claim his maiden ECB ARC stage victory on SS2, where Walkem had to settle for second fastest.

An absolutely worry free day for Classic contender Jeff David with only himself to beat.

In the Side-by-Side Challenge, where Michael Guest once again proved the outright pace of the Can-Am with a win on the opening stage, only to once again prove the fragility of the car as he parked it up on the second.

That allowed archrival Cody Crocker to scoot through for the Heat win and in doing so clinch enough points to award him with the title for another year.