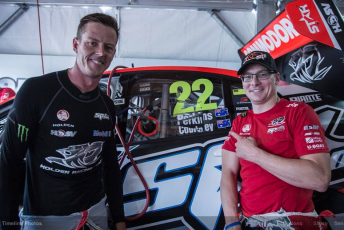 An emotional James Courtney has sailed through the first test in his comeback at the Castrol Gold Coast 600 without a hitch.

Courtney turned 15 laps of the 2.96km street circuit in Practice 1, finishing with the 13th fastest time.

After returning to the garage for checks several times during the run, Courtney came through without a hiccup.

The former champion admitted that there had been a deal of apprehension around the HRT garage leading into the session.

“I think everyone here is breathing a sigh of relief,” Courtney told Speedcafe.com.

“No-one knew what was going to be like. You can’t simulate what we go through for this.

“When they said ‘come in the session is over’ from then I thought about it and everything felt good.

“I was on the radio to the lads saying ‘thanks it’s good to be back’. It’s been tough not being here so I got a bit emotional there.”

Courtney said he had not felt any discomfort during the 30-minutes behind the wheel of the #22 Commodore, or during driver change practice with Jack Perkins this morning.

“I was too busy hanging on to worry about how I felt. I wasn’t in pain or anything,” he said of the session.

“I was thinking ‘gee I hope everything stays where it should’. Once I started doing laps I started to think about the car and forget about this (pointing to his torso).”

Perkins will now step behind the wheel for the two co-driver practice sessions before Courtney returns to the track in Practice 4.

Next Story Chris Pither leads the way in co-driver practice