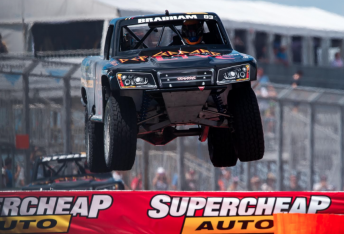 Australians Matthew Brabham and Paul Morris have proclaimed their fondness for Stadium Super Truck racing after the pair scored podium places in the weekend’s opening heat.

In the first of four 10-lap races on the Gold Coast, Brabham claimed second behind American Burt Jenner while Paul Morris tore through the field to finish third.

It was Brabham’s second start in the SST machines after gaining a late call-up for a street race in Toronto midway through the year.

Brabham, who brushed the wall in practice, began the race rubbing panels and diced at close quarters with US star Sheldon Creed before steering clear of danger in the closing laps.

“I really just had to man up and grow a pair really,” Brabham, a US F2000, Pro Mazda champion and Indy Lights race winner, said.

“There were people crashing everywhere and I was trying to avoid things.

“I think the most physically demanding thing is landing on the jumps.

“When you land it takes all the wind out of you. But I had probably the most fun I’ve ever had in a racecar.”

Morris, who arrived with his helmet plastered in dried mud after competing at a recent sprintcar meeting, was making his debut in the truck class.

“You can race these things worldwide and anyone can put a budget together,” 47-year-old Morris enthused.

“Compared to the Dunlop Series and whatever else is around it’s pretty good exposure for your sponsors.

“It’s my sort of racing actually. You can have a beer on the way home.”

The trucks have a further practice session tomorrow before the second race with the final two races scheduled for Sunday.

The trucks will move to Sydney’s Valvoline Speedway for the second leg of its whistle-stop tour next weekend.

Next Story Kassulke in critical condition after Ascari fire