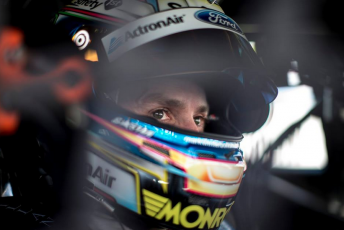 Escaping the Castrol Gold Coast 600 with his points lead unscathed will mark another major step in Mark Winterbottom’s quest for a maiden V8 Supercars title.

The 34-year-old holds a 399 point lead over Red Bull’s Bathurst winner Craig Lowndes ahead of the season’s final events at the Gold Coast, Pukekohe, Phillip Island and Sydney Olympic Park.

Winterbottom admits he’s “in the box seat” to claim the title, but is far from declaring it won ahead of the weekend’s twin 300km races around the notorious Surfers Paradise street circuit.

“It’s probably ours to lose, which is good and bad,” said Winterbottom of the championship picture, which took a major turn last time out at Bathurst thanks to the injury to team-mate Chaz Mostert.

“We’ll hopefully have a good run here, (but) there’s lots of walls, lots of action and a fair chance of crashing at this place in particular. If we survive this then the next three are not as high risk.

“We can see the finish line but we’re still a little away from it. We’ve tried for many years and to finally get one win, you can’t really describe how important this championship is.

“(Jamie) Whincup has won so many. James (Courtney) split him up in the middle there and we want to be next. Hopefully we can get it done but there’s a long way to go.”

In addition to the proximity of the concrete walls, Winterbottom says that the vagaries of the electronic sensors used to police kerb-hopping make the GC600 a tricky risk and reward balance.

“They can be a bit unpredictable whereas a tyre bundle on the corner, if you hit it you’ve gone too far and if you miss it you’ve gone ok,” he said of the sensors.

“There’s that bit of unknown with the sensors, which is the thing you really have to try and overcome with this track.”

Winterbottom and co-driver Steve Owen are looking to take out the Pirtek Enduro Cup trophy this weekend as part of Prodrive’s stellar season.

The pair lead the enduro standings by 78 points over Garth Tander and Warren Luff, with Shane van Gisbergen/Jonathon Webb a further 60 adrift in third.

In addition to the enduro title, Owen says that being part of a maiden overall championship for Winterbottom and Prodrive would be a special feeling.

“It’d be pretty special because it’s been a long time coming for Ford and Prodrive,” said Owen.

“I’ve been there for three years now and have seen them evolve from a good team into a great team.

“This year is the perfect opportunity for them to win the championship. Frosty deserves it and I’d love to be a part of it.”