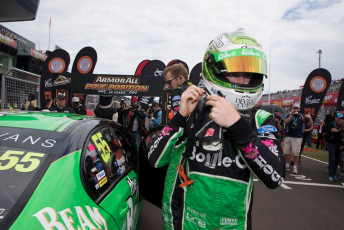 David Reynolds on the grid at Bathurst earlier this month

The future of out-of-contract Prodrive star David Reynolds appears no closer to a resolution on the eve of the Castrol Gold Coast 600.

Reynolds is enjoying his most competitive season to date as he sits third in the points standings, just 33 points behind second placed Craig Lowndes.

Despite the results, Reynolds has now emerged as the last big-name driver yet to ink a 2016 deal.

While Prodrive has not publicly dismissed the prospect of Reynolds continuing with the team, rising star Cameron Waters is set to inherit his current seat.

As previously reported, the 30-year-old Reynolds is understood to have turned down an offer from Brad Jones Racing prior to Bathurst as he hung out for a renewal at Prodrive.

BJR subsequently moved instead to sign Tim Slade, whose place at Walkinshaw evaporated with the impending exit of sponsor Supercheap Auto.

Reynolds was in recent weeks known to be one of two contenders for David Wall’s drive at Volvo, which has now elected to lock in James Moffat.

Erebus Motorsport is now said to be the latest to chase Reynolds’ signature as it looks to replace the Tekno-bound Will Davison.

Although the privately funded Mercedes team is currently a long way from the level of Prodrive, the drive could prove Reynolds’ only way of avoiding a year on the sidelines.

Other remaining seats at Nissan, BJR, and Lucas Dumbrell Motorsport are all likely to require a driver to bring funding.

“I really can’t say anything about where I may be because I honestly don’t know myself yet,” Reynolds told Speedcafe.com in the Gold Coast pitlane this morning.

“At the moment there isn’t anything to tell.”

The silly season has been in full swing over the last fortnight, kicked off by the confirmation of Fabian Coulthard’s move to a two-car DJR Team Penske alongside Scott Pye.

All 26 Racing Entitlements Contracts were entered by last week’s deadline, although may still be traded between teams prior to the start of the new season.

Super Black Racing is at the heart of the REC speculation, with the currently Prodrive-aligned team said to have purchased the #47 license from Walkinshaw Racing.

Who will prepare and drive the Super Black entry is yet to become clear, with Chris Pither and Ant Pedersen both thought to be contenders to replace incumbent Andre Heimgartner.

*Driver to be officially confirmed