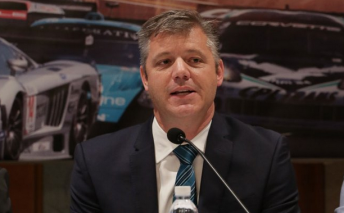 V8 Supercars chief executive James Warburton has moved to assure team owners that he will remain in the sport, denying reports that he is set to defect to the National Rugby League.

“I said this morning to the owner group that it’s just speculation,” Warburton told Speedcafe.com.

“I’m loving what I’m doing at V8 Supercars and I’m committed to the sport.”

Warburton however refrained from answering specific questions of whether he is interested in the job or had been approached by the NRL.

“I mean it’s all just speculation by a whole pile of people,” Warburton said.

“I’m loving what I’m doing and I’m focussed on that and I’m committed to the sport.”

The rugby league developments this week forced Warburton to announce his allegiance to V8s after he became the seventh chief executive of the category since 1997, replacing David Malone in 2013.

The category is eager to put on its best face this weekend as V8 Supercars hosts a delegation from the Kuala Lumpur street race which makes its debut as a championship round from August 12-14 next year.

Warburton danced around the question of whether a Korean race would join the series as early as next year but did say an approach from an unspecified country had been fielded.

“We have got a lot of irons in the fire. There’s some things we have to really investigate and run through and put our minds through next year,” Warburton told Speedcafe.com.

“We have an MOU (Memorandum of Understanding) for 2017 in Asia and there is really strong interest.

“We have an approach for next year but it has got to be the right offer.

“We have to get our international strategy right as opposed to jump at any opportunity.

“But it’s got to be under the right guise and the right revenue opportunity and that’s where we need to be.”