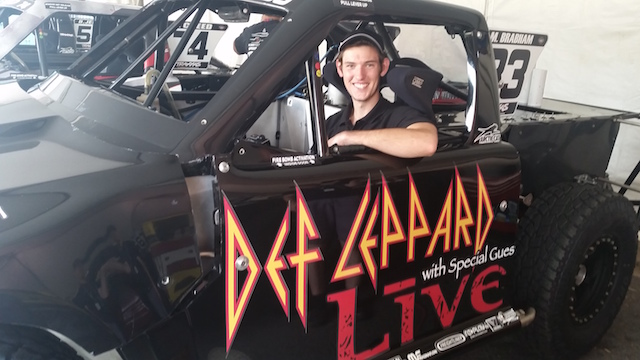 Gordon, the mastermind and driver of the Charlotte-based SST operation, returns to the Surfers Paradise track where he stamped himself as a star in the making in IndyCars more than 20 years ago.

In 1993 Gordon was feted as a member of the then named ‘brat pack’ of hotshot young drivers when he finished third behind Nigel Mansell and Emerson Fittipaldi in what was the third running of the IndyCars at the Gold Coast.

“The track has changed a little bit since my IndyCar days,” Gordon told Speedcafe.com as the track length has been shortened from 4.5km in the IndyCar days to 2.96km in V8 Supercars configuration.

Brabham, a product of The Southport School, arrived from Indianapolis earlier today to take charge of the #83 SST which carries Def Leppard and Live livery. Robby Gordon in action at Norwell

Action athlete Matt Mingay, who had a taste of the Super Trucks at the Clipsal 500 at Adelaide earlier this year, completes the Australian contingent in the 11 truck field.

Brabham, who continues to work on securing a drive at the 100th running of the Indianapolis 500 next year, landed the Gold Coast seat after impressing at his only previous SST start at Toronto midway through the year.

“He raced in Toronto and did a good job there without any preparation beforehand,” Gordon said.

“Bill Hynes, one of our racers saw Matty and was impressed with him and decided to back him which has given him the opportunity to comeback to his hometown and race.”

Gordon said he was forced by event officials to adjust the placement of some of the five launching ramps around the circuit for the four races this weekend.

“I had to do a bit of rearranging which means we are going to hit them faster,” Gordon said.

“That concerns me a little bit.

“We have one jump placed dead middle of the chicane on the back straight.

“So we make a right jog, a left jog, a jump and we miss the last two sections of it and jump across it.”

Brabham is itching to get behind the wheel after a year which has seen him restricted to one-off drives in a variety of classes including Indy Lights, Formula E, SST and a Late Model race along with two IndyCar tests for Andretti Autosport.

“I guess I’m at that point in my career where I’ve got to accept anything I can get. There’s a lot of late call-ups,” Brabham told Speedcafe.com.

“Coming back to the Gold Coast to see all my friends and my family and race at the same time is just awesome.

“I’m just going to have some fun in practice tomorrow and just get my bearings really.

“I’ve driven on this track in Formula Ford so I know where the track goes and I’ve been watching IndyCar races here my whole life.”

Morris had his first chance behind the wheel of the 600bhp machines which kick off a two event series that continues next weekend at Sydney’s Valvoline Raceway.

“I feel a bit better now I have had the chance to actually drive one,” said Morris.

“To be honest they are a lot like driving a V8 Supercar in the wet.”