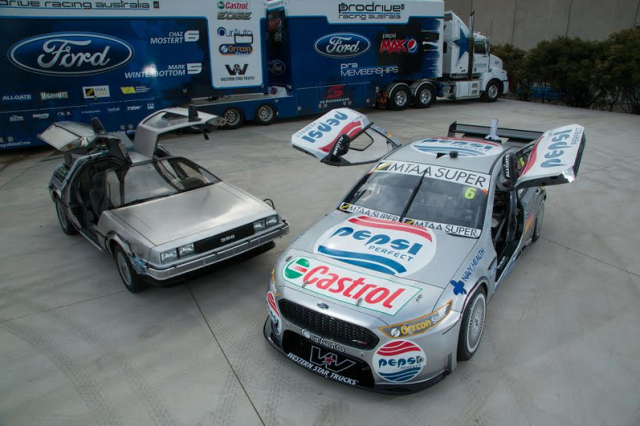 The Prodrive V8 Supercar with an original DeLorean

Prodrive has taken the wraps off a Back to the Future DeLorean-themed look for Cameron Waters and Russell Ingall at this weekend’s Castrol Gold Coast 600.

The promotion has been launched on the very date that Michael J Fox’s character Marty McFly travelled through time to visit in the second edition of the Back to the Future franchise.

Prodrive’s involvement ties in with the 30th anniversary re-release of the original film, which like the V8 Supercars team enjoyed a commercial partnership with drinks giant Pepsi.

The Gold Coast livery sees the #6 Ford wrapped in the silver colour of the movie’s famous DeLorean, with Pepsi Perfect branding referencing a ‘futuristic’ drink that McFly ordered in the second movie.

For pre-event promotional purposes, the car has also been fitted with DeLorean-style gullwing doors, a replica onboard ‘flux capacitor’ and hand-built ‘thrusters’ at the bank.

Prodrive team principal Tim Edwards says the promotion, which is the brainchild of Prodrive’s marketing director Peter Trevaskis, is a new benchmark in V8 Supercars.

“This is without doubt one of the best activations I’ve seen in nearly 30 years in the motorsport industry,” said Prodrive Racing Team Principal, Tim Edwards.

“The lengths the entire team have gone to in order to prepare the car are just fantastic.

“Every department has played some role and the finished product looks amazing on the big screen and in the flesh.

“It is a shame that Chaz (Mostert, injured at Bathurst) won’t be around to drive it but he’ll appreciate it more now he is watching from his hospital bed.”

Prodrive Racing Fabrication shop leader, Ben Cockerell, says that the modifications to the car – including the gas-powered door mechanism – proved challenging for the whole team.

“Once we worked out what we needed to achieve, it became a real passion project for everyone involved in preparing the car,” Cockerell said.

“Modifying and making the gullwing doors without changing the car was a big challenge.

“Making them look like they were actually part of the car was the hardest part so I hope our fans and fans of the movie appreciate how much effort has gone into this car.”

Prodrive has produced a short film to coincide with the livery featuring Edwards, Mostert, Mark Winterbottom and Russell Ingall.

Mostert’s scenes were filmed prior to his leg-breaking crash at Bathurst, while Ingall’s were added following his appointment to the team late last week.

“Everyone my age grew up wanting to do what Marty and the Doc did and the DeLorean was a really cool car so to actually get to drive one and recreate parts of the movie in the way we have is really cool,” said Winterbottom.

“While I am no actor I enjoyed the filming and to see Tim playing Doc Brown and Chaz and Russell get into the swing of things was cool.”

VIDEO: Pepsi goes Back to the Future 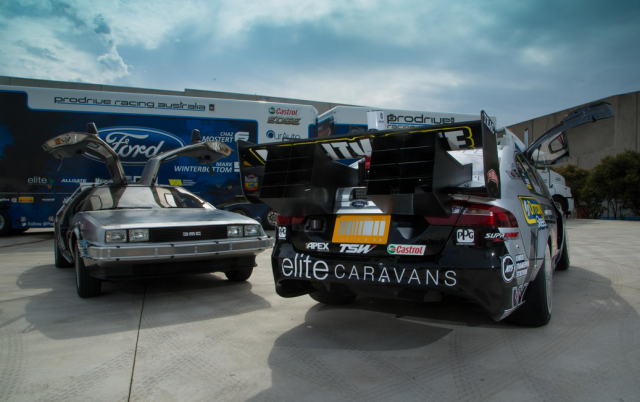 The custom build ‘thrusters’ add further to the DeLorean look

Next Story VIDEO: PRA goes Back to the Future