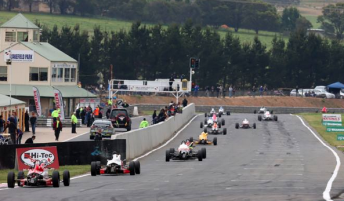 The Formula Ford Association has announced plans for a six-round series in 2016, despite its Shannons Nationals presence being dramatically reduced.

The FFA has confirmed that the Sandown and Queensland Raceway Shannons events will be a part of its new schedule, along with November’s Island Magic meeting at Phillip Island.

Negotiations are also currently taking place to slot into other meetings at Winton, Sydney Motorsport Park and Wakefield Park.

The FFA, which has administered national Formula Ford over the last two years, will collate its own pointscore for the series.

In a statement, series co-ordinator Phil Marrinon made clear the FFA’s disappointment over its reduced Shannons Nationals presence.

“Formula Ford has been a strong contributor to the Shannons Nationals events over the past two years which have always been well run and provided good value for our competitors,” said Marrinon.

“We were seeking more rounds on the 2016 CAMS run event but they were not forthcoming in giving us that opportunity.

“We are disappointed at their decision to limit our access to the Shannons events especially as we have been one of the events best customers in the past two years.

“Our grid numbers were consistently the largest, we paid on time and were well coordinated. In any normal business relationship, we would be considered to be the perfect customer.

“As a result we have been forced to look at other events to create an FFA sanctioned national series, a series that our members and the wider Formula Ford community are seeking.”

The Formula Ford Series will continue its association with the ‘Road to Indy’ ladder next season, with the winner again awarded an USF2000 test.