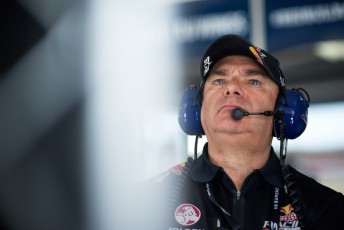 Triple Eight boss Roland Dane is set to be re-elected to the V8 Supercars Board unopposed at the category’s Annual General Meeting on Thursday.

Dane, who has been a team representative on the board since 2009, will be installed for a further two years after no other nominations were received by the deadline on Tuesday.

The lack of alternative candidates comes as a surprise following murmurings that a rival team principal was set to be put forward.

In a statement supplied to Speedcafe.com on behalf of the teams, Volvo team principal Garry Rogers confirmed that Dane and Brad Jones will remain as the two team representatives.

Jones was also re-elected unopposed 12 months ago for a further two-year term.

“As in previous years and leading up to the AGM all the team owners have had various discussions at what they see is the best options for the elected board to manage the business,” explained Rogers.

“It has been decided that the current board has done a capable job over its duration and it is the opinion of the owners that at this election there is no one that would serve the interests of the members more diligently than current team representatives, Roland Dane and Brad Jones.

“The current representatives on the board have worked well with V8 Supercars to enable the category and its staff to manage and grow the business and it would appear that both Brad and Roland have retained a healthy relationship with our other business party, the Archer Capital Group.

“Therefore there has been no nomination other than the current two sitting board members (Dane and Jones).”