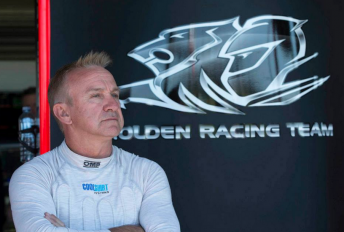 A typically jocular James Courtney has laughed off angst over Russell Ingall’s shock move from the Holden Racing Team to Prodrive ahead of the Castrol Gold Coast 600.

Ingall will race in place of the injured Chaz Mostert this weekend after playing a similar substitute role for HRT star Courtney at Sandown and Bathurst.

Speaking to Inside Supercars, Courtney confirmed that Ingall defected to Prodrive a full week before doctors signed off on his own return to action on the Gold Coast.

While Ingall had no formal ‘standby’ agreement with the HRT beyond Bathurst, his opportunistic dive for the suddenly free seat at Prodrive is said to have upset management at the Holden squad.

“He jumped the gun a little, he called it before I’d called mine,” said Courtney of Ingall.

“He gave me a call on Monday (after Bathurst) and told me that I had to be ready because he wasn’t going to be doing it, he’d made other arrangements.

“So the team was a little bit worried for those first few days trying to get a replacement just in case, but luckily we didn’t have to call on that.

“We were pressing pretty hard to get (Greg) Murphy in there, but thankfully I can drive.”

Courtney said he had personally been aware that Ingall was angling for the Prodrive seat as early as the Saturday at Bathurst.

“I walked out of the track with ‘the muscle’ (Ingall) on the Saturday afternoon and he was into Chris O’Toole (Prodrive team manager) that afternoon,” said Courtney.

“Chaz had just taken off in the helicopter and Russell was already into him trying to get that drive.(He’s) a shady fella ‘the muscle’.

“But my hat goes off to him. He gets his 250th start this weekend which is a great achievement for Russ.

“It’s also great for the category with the Ford versus Holden sort of thing. We can really get a driver’s opinion on where the different aero packages are at.”

Courtney added that the team’s back-up plan for the weekend is “just to suck it up and keep pressing on”.

“I drove a car out at Paul Morris’ track (Norwell driving school) on Friday, banged around and had a bit of fun for a while,” he said.

“I’m 99.9 percent sure that I’m going to be fine for the whole weekend.

“The surgeon is going to be there all weekend monitoring me, making sure nothing goes wrong. We’ll be fine.”

Courtney has missed three race meetings since he was struck by pit equipment dislodged by the down draft of a Navy helicopter at Sydney Motorsport Park.