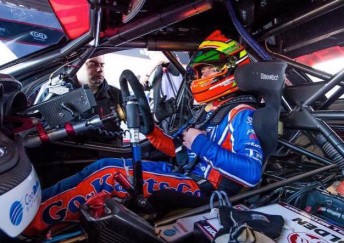 Aaren Russell will make his V8 Utes Racing Series debut as a wildcard entrant at this weekend’s Castrol Gold Coast 600.

The Dunlop Series regular will pilot the #33 Matt Stone Racing Ford on the punishing Surfers Paradise streets which plays host to the penultimate round of the V8 Utes Racing Series.

Aiming to land a V8 Supercars co-driver role in the future, Russell says the chance to tackle the Surfers Paradise street circuit will provide valuable track time at the Pirtek Enduro Cup venue.

“We were looking at getting some experience on the Gold Coast, which would give us that extra edge when trying to get into the enduros here next year,” said Russell.

“This will be my first time racing at the Gold Coast and in a V8 Ute, so I’m definitely getting thrown in the deep end but I have some pretty good teammates in George (Miedecke) and Ryal (Harris) to feed off.

“I’ve known Matt (Stone) for some time now, I raced a Stone Brothers (Matt’s father’s team) Ford FG V8 Supercar in the Dunlop Series in 2013, we got talking at Bathurst about the wildcard Ute and I’m really looking forward to working with him again.”

Russell will make his Utes debut in opening practice on Friday before contesting three 12 lap races over the weekend.