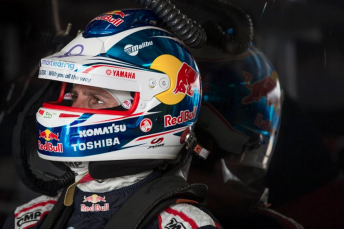 Jamie Whincup believes he is being unfairly portrayed as the villain of V8 Supercars following the recent Supercheap Auto Bathurst 1000.

More than a week on from the race, Whincup stands by his decision not to pit behind team-mate Craig Lowndes in the closing stages as ordered.

Subsequently passing the Safety Car on Mountain Straight led to a drive-through penalty, costing the Red Bull team any chance of a one-two finish.

What followed was a torrent of anti-Whincup sentiment on social media, which the driver says was unnecessarily fuelled by ‘influential people within the sport’.

Whincup’s shaky standing with the public threatens to tarnish his record achievements, which includes an all-time high tally of six championship victories.

“It is what it is, you can’t control what people do or say,” Whincup told Speedcafe.com when asked of the reaction and its affect on his public image.

“The only thing that disappointed me after Bathurst was what was done by influential people within the sport. That’s all I can say.

“There were influential people within the sport provoking the uneducated to make a call one way or the other. I’m completely against that.”

Whincup says that onboard footage from his car that has not been broadcast shows that green lights were displayed on the Safety Car as he approached.

Only when he arrived on the tail of the Safety Car, he maintains, did the lights turn yellow, by which point he says he was committed to overtaking it.

“Unfortunately what the television portrays is only a piece of it,” he said.

“I looked at the footage of me coming over the hill that they replayed on the telecast and it just looks like I’ve driven past the Safety Car with yellow lights flashing.

“Unfortunately no one saw my onboard footage where there was three lots of green lights flashing and the car is all the way off to the right.

“At the end of the day I was made to look like a villain that goes against team orders. That’s so far from the truth.

“I thought that an error was being made and, not knowing there was a Safety Car, they were pulling both cars in on the same lap,” he continued, referring back to the initial decision not to pit.

“I was just trying to do what I could and make a call at the time. I’m confident that 99 out of 100 people in my situation would have done the same thing.”

Whincup made it clear that acting on his own instincts, such as the decision not to pit behind Lowndes, is part of his mandate as a driver.

“What would I have done in the heat of battle again? I would have done exactly the same thing,” he said.

“Over the last 10 years, me making decisions in the car and making a call when a potential issue is occurring, 45 out of 50 times that’s been a positive.

“The 90 percent of the time when it turns out to be right doesn’t get anywhere near the publicity that the other 10 percent does.

“I’m in the business of being the best driver I can be and that includes making decisions if I think there’s a potential issue.”