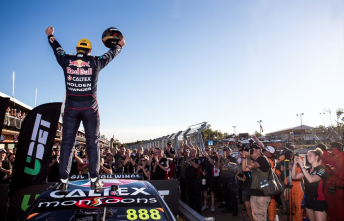 Craig Lowndes’ Holden will run under the TeamVortex banner when Triple Eight expands to three cars next season, the team has confirmed.

The deal sees Caltex return to primary backing on a V8 Supercar for the first time since it left Stone Brothers Racing at the conclusion of 2007.

Caltex will also remain as a secondary sponsor on Triple Eight’s Red Bull Racing Australia Commodores, which next year will be campaigned by Jamie Whincup and Shane van Gisbergen.

“We’re extremely pleased to have Caltex step up for 2016 and beyond with the creation of TeamVortex,” said Triple Eight owner Roland Dane.

“This gives us a brilliant opportunity to give Craig a platform to continue to rack up race wins including, hopefully, a few more Bathursts.

“Furthermore, it allows us to build our engineering expertise here for the betterment of the entire Triple Eight organisation.

“This is also a great testament to the category as a whole with an organisation of the stature of Caltex choosing to increase its involvement and visibility at this time.”

The #888, which Lowndes has campaigned since he joined the team in 2005, will carry over to the TeamVortex entry, provided the veteran does not win this year’s title.

“The one thing that I really wanted was the 888 number,” said Lowndes.

The energy drink brand took over from Vodafone as the primary backer of Triple Eight’s two-car effort in 2013.