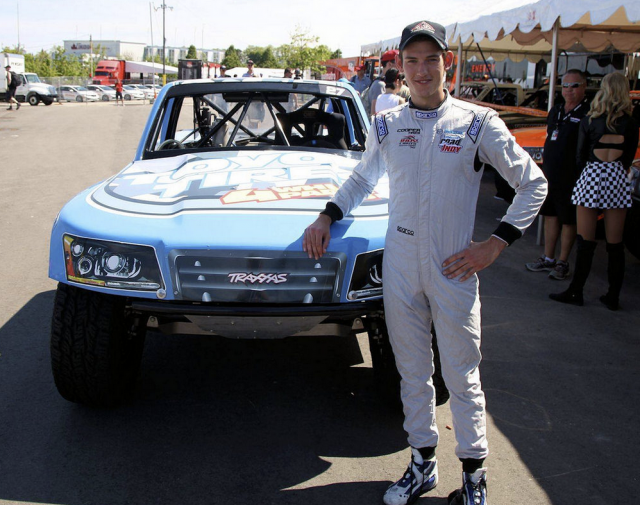 US-based Matthew Brabham has earned a spot in the Stadium Super Trucks field at the Castrol Gold Coast 600 V8 Supercars meeting this weekend.

The 21-year-old grandson of the late Sir Jack Brabham will arrive back on the coast, where he was once a student at The Southport School, on Thursday.

Brabham will join Paul Morris and Matt Mingay as part of the Australian line-up in the 10-truck field.

The son of highly decorated former IMSA and IndyCar racer Geoff Brabham had a taste of the high flying Super Trucks at Toronto earlier this year.

“It is completely nuts,” he said of the spectacle.

“I’ve seen the Stadium Super Trucks do their thing countless times on street circuits as part of the Verizon IndyCar Series and it’s seriously cool, but facing those jumps from behind the wheel – they are triple the size they look from the outside.”

Following the Gold Coast weekend, Brabham will contest the second leg of the special Super Truck series at Valvoline Raceway in Sydney on October 31.

The Sydney event, promoted by TEG Live and presented by myPlates and the Daily Telegraph, will see the trucks share the bill with the Ultimate Sprintcar Championship

“Heading to Valvoline Raceway will be awesome,” young Brabham said.

“Grandad (Sir Jack) started his career at the Sydney Showground in Midget racing, so for the myPlates Stadium Super Trucks to be alongside the Ultimate Sprintcars will be a real thrill.”

On his first and only appearance at the Gold Coast 600 in Formula Ford in 2010, Brabham raced against current V8 Supercars stars Chaz Mostert, Cameron Waters, Ash Walsh and Jack LeBrocq, along with Porsche Carrera Cup front-runners Nick Foster and Shae Davies.

The 600bhp Stadium Super Trucks jump 10m high and travel 80m before returning to the ground as they launch over purpose built ramps.

This latest appearance for Brabham comes in a year when he started out in several Indy Lights races before testing an IndyCar for Andretti Autosport and completing two Formula E appearances for the same squad.

He is continuing a plan to lodge a special entry for the 100th running of the Indianapolis 500 next year.

“My goal is still to make the Indianapolis 500 and become just the third, third generation driver to start the race,” Brabham said.