Australian Scott Andrews has completed a record-breaking season by clinching the F1600 Formula F Championship with two races to spare at the Pittsburgh International Race Complex.

After claiming pole for the opening heat of the three-race meeting, Andrews spun on the pace lap before finishing third behind Jordan Cane and Robert Megennis.

The Exclusive Autosport Spectrum driver was forced to start from last following his spin, triggered when he was warming up his tyres.

“I managed to run out of talent coming out of pit lane,” said Andrews.

“I spun it warming up the tyres. As much as I wanted to go back through the field to regain my starting spot I imagined I would get a penalty after that.

“So I decided against it. Hopefully with a few new parts in the car I could have got close to the win, which we did. I didn’t quite get there, but I am absolutely stoked with the team.

“I saw the front three battling very hard,” he continued. “I thought if they were going three wide somewhere I might get an opportunity to maybe snag a win.

“Unfortunately there was a bit of contact with Skylar (Robinson) who was still in the running for the championship. I hate to see him go out like that but I think that means we clinch it. So I could not be happier.”

After becoming caught up in another driver’s accident in Race 2, the Spectrum sustained some heavy damage which saw him forced to sit out the final race of the season. Norwegian Andreas Bakkerud took the honours in the latest round of the FIA World Rallycross Championship presented by Monster Energy in Italy.

With one round remaining, Team Peugeot-Hansen has secured the Team’s Championship by assuming an unassailable 63-point lead over Ford Olsbergs MSE.

Meanwhile Bakkerud also claimed the Monster Energy Super Charge Award for his rapid start off the line in the final.

“The rain has made today’s conditions really hard but I kept pushing, and tried to keep it as clean as possible,” Bakkerud said.

“We had some unfortunate results over the summer but the team never gave up – they have worked so hard.”

Solberg was able to capitalise on Timmy Hansen’s retirement in the semi-finals to secure crucial championship points.

He now leads Hansen by 26 points going into the final round where a total of 30 driver points are available in Argentina.

The final round of the 2015 FIA World Rallycross Championship will take place in the all-new location of Rosario in Argentina next month from November 27-29. Felix Rosenqvist put the seal on a dynamic season by bowing out with a win in the final race of the European Formula 3 Championship at Hockenheim.

The final 18-lapper was littered with Safety Car periods as Rosenqvist ended the season by accumulating 508 points.

Earlier Giovinazzi ensured he would finish second in the championship after winning the 21-lapper from Jake Dennis (Prema Powerteam) with Rosenqvist third.

Giovinazzi finished on 412.5 points with Dennis claiming third in the standings on 377. Mercedes tester Pascal Wehrlein’s eighth place was good enough for him to secure the DTM title with a race in hand at Hockenheim.

Wehrlein became the youngest driver to claim the DTM crown, a day short of turning 21.

Green went one better in the 39-lap finale, by leading an Audi podium sweep with Abt Audi pair Mattias Ekstrom second and Edoardo Mortara third.

The win saw Green clinch second in the standings on 150 points, 19 shy of Wehrlein but three ahead of Ekstrom. 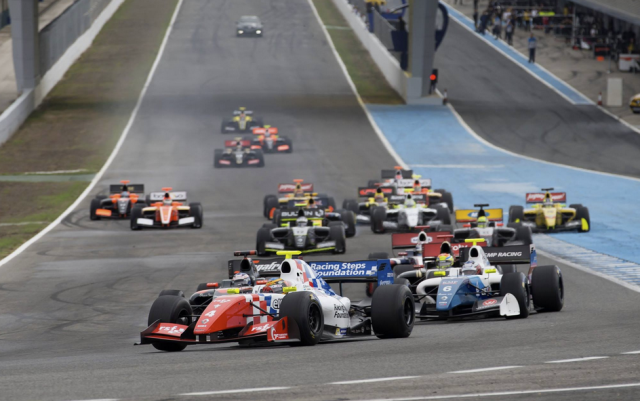 Fortec ace Oliver Rowland speared to a record eighth win of the season in the opening race of the Formula Renault 3.5 series at Jerez.

With the FR3.5 title already in his keeping, Rowland took the honours from Egor Orudzhev (Arden) while Matthieu Vaxiviere (Lotus) third.

In the final race of the 2015 series, Nyck de Vries (DAMS) denied Rowland a perfect weekend by scoring a 2.5s win.

Rowland managed to hold out Vaxiviere in a photo finish for the minor podium positions.