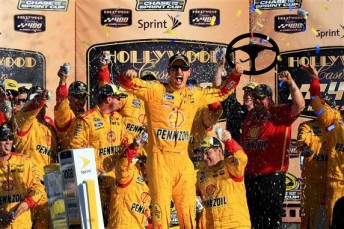 Logano is all smiles in Kansas

Joey Logano has continued to be a major thorn in the side of his rivals as he took his second straight win in the second phase of the Chase for NASCAR’s Sprint Cup.

After being one of the dominant drivers in the first portion of the Chase, Kenseth was brought back to earth last weekend. In Kansas he led a race-high 153 of 269 laps, but was sent spinning when he tried to defend his race lead again the fast-finishing Logano.

Like it was for defending champion Kevin Harvick in the first phase of the Chase, Kenseth has to win next weekend at Talladega.

“Strategically, that doesn’t seem like such a great decision for him,” said Kenseth who finished 14th.

“But it’s the one he made, and that’s how he wanted to win.”

Logano took the win after a green-white-chequered overtime finish, holding off Denny Hamlin to notch his fifth Sprint Cup victory of the year, his second at the 1.5-mile track and the 13th of his premier-series career.

“When you see trophies you want to get them,” said Logano.

“Our goal is to keep everyone on edge when they go into Talladega and we can feel comfortable about it, so I’m just proud of what this team is doing. We’ve just got to keep this speed in our race cars and keep doing what we’re doing.”

A wide variety of issues befell several Chase hopefuls, making the task ahead of them that much more difficult in next weekend’s elimination race at treacherous Talladega Superspeedway.

A look at the standings is more about focussing on the bottom four which is Kyle Busch, Ryan Newman, Dale Earnhardt Jr and Matt Kenseth.

If any driver in the top-12 wins at Talladega they will automatically advance to the next round of the Chase.