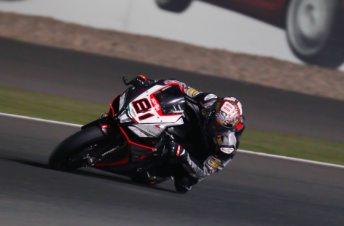 The Aprilia rider started Race 1 from sixth but made steady progress through the field that saw him occupy third spot with 10 laps remaining.

The Spaniard quickly set his sights on reeling in the Kawasaki’s of leader Tom Sykes and newly crowned world champion Jonathan Rea.

A scrap between Rea and Sykes allowed Torres to latch onto the back of the pair, before quickly leapfrogging the duo to claim the lead.

Rea pushed Torres hard on the closing the lap but he was unable to deny the Aprilia rider a maiden victory as Sykes finished a distant third.

The final race of the season produced a thrilling finish with Haslam pipping Davies for the victory by just 0.110s, with Sykes a whisker behind in third.

Haslam and Davies wasted little time in moving away from the pack as the race developed into a battle between the pair for victory.

In the end, Haslam’s Aprilia just had a slight edge on Davies’s Ducati in the drag race to the flag.

Davies’ podium saw him jump ahead of Sykes to finish second in the championship standings.

Van der Mark crossed the line in fourth ahead of Sylvain Guintoli and Leandro Mercado.

Meanwhile, Rea missed out on setting a new World Superbike Championship points record as a mechanical failure saw him retire on lap six.