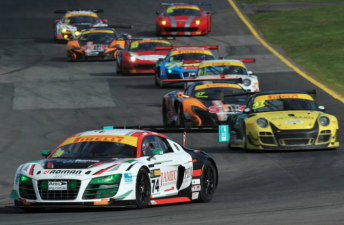 Australian GT organisers are targeting 30 car grids for sprint and endurance championship events in 2016 after receiving a flood of early entries.

The championship has been gathering momentum in recent seasons with teams and competitors already committing to the revamped series format for next season, which closely follows Europe’s Blancpain GT Series.

From next year Australian GT will run a six round sprint series alongside an additional endurance series, contested over three hour races at Phillip Island, Sydney Motorsport Park, Hampton Downs and Highlands Park.

“We have had immediate response from quite a number of the current competitors and interestingly almost all have entered both championships,” Collier told Speedcafe.com.

“Some of the first responses were from competitors who are new to the category, so that is pretty good. We are very pleased with the initial response.

“A good number for us in each championship would be around 30 and that is what we are targeting. We know we will get some round by round people too.

“Early indications are that we will meet our target of 30 in each.

“Given the reaction there is a general acceptance that we will get it (the new championship format) right.

“The competitors understand that we have had to expand the business to cater for the demand we have got.

“I think only having four endurance races is a good thing. Having two (of the endurance races as double-headers) at the sprint rounds will make it feasible for the competitors to do both.”

According to Collier, the new Australian GT format has also attracted interest from V8 Supercars teams.

V8 Supercars’ recent takeover of the Bathurst 12 Hour is said to have ignited several serious enquiries.

Although no such entries have been received to date, the category is hopeful that at least one V8 Supercar outfit will field cars next year.

“I think they (some V8 teams) will (enter) but not at any detriment to their V8 activity but in addition (to their commitments),” said Collier.

Entries for the 2016 Australian GT Championship are scheduled to close on November 27.

Meanwhile, the championship has also confirmed an additional cup will be awarded over the two New Zealand endurance rounds at Hampton Downs and Highlands Park.

Australian GT plans to offer a significant prize to the victory which is currently being discussed.