After a nine-day stint in Orange Base Hospital, Chaz Mostert has been flown to Brisbane via an AirMed aircraft to continue his recovery from injuries sustained at Bathurst.

Mostert travelled to Brisbane on Sunday following an October 9 qualifying crash at Bathurst that left him with a broken leg and fractured wrist.

Although based in Melbourne, Mostert will spend coming weeks in Brisbane with his father Eddy, who attends each race with the 23-year-old.

Mostert will stay initially in a private medical facility, undergoing assessment from a team of specialists before embarking on a rehabilitation program.

Mostert’s time in Orange had been extended by several days after his injuries required a second operation last week.

The 2014 Bathurst winner will be on the sidelines for the remainder of the V8 Supercars season.

“I am really happy to be back in Brisbane as it gets me closer to family and friends and is an important step on my road to recovery,” said Mostert.

“I must thank everyone at the hospital in Orange as they put up with me for longer than we all originally thought and the care I received was amazing. 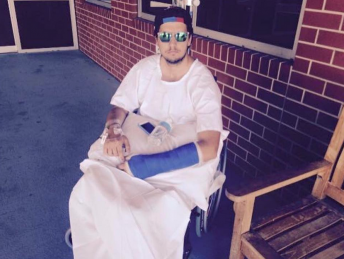 Mostert pictured at Orange Hospital on Saturday. pic via facebook

“I am overwhelmed by the support from the V8 Supercars community – other teams, legends of the sport and fans. I didn’t realise how wide our sport reached and how much care there is.

“Every bit of support helps with my healing process and I am looking forward to getting fit and getting back in the car next season.”

As announced on Saturday, Prodrive’s #6 Ford will be shared by Cameron Waters and Russell Ingall at this weekend’s Gold Coast 600 before the former takes over the car for Pukekohe and Phillip Island.

A decision on who will drive the car at the season-ending Sydney 500 is yet to be made.

“I will watch as many sessions as I can this weekend and am super-pumped to watch Russell in my car,” continued Mostert.

“I‘ve learnt a lot racing around him; he races hard, so what better person to fill in for me and back Cam up.

“I think they have a good shot and I am just happy that Russell has been able to step up and do it for us.

“I wish both of them all the luck this weekend and want them to bring a surfboard trophy back so I can get some rehab going in the surf!”