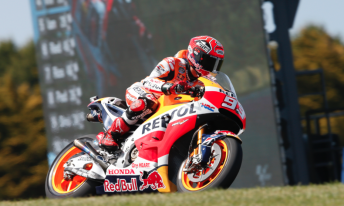 The reigning world champion had been firmly in the hunt for victory throughout but it was a final lap surge that allowed Marquez to pass Lorenzo to take the chequered flag in a breathtaking climax.

Lorenzo, who had led the majority of the encounter, was left to settle for second, with Ducati’s Andrea Iannone coming home in third ahead of championship leader Valentino Rossi.

The result has seen the title race take another twist with Lorenzo cutting the deficit to Rossi to 11 points.

Iannone initially led the contest as he made the most of his Ducati’s supreme straight-line speed.

The pace advantage ensured he would play a factor throughout the race although the Italian was lucky not to lose momentum when he was struck by a seagull on the second lap.

It wasn’t long before Lorenzo moved into the lead and began to gap the field, opening up a 1.1s lead over the squabbling trio of Iannone, Marquez and Rossi.

With Lorenzo starting to drift away at the front, Marquez set his sights on reeling in the Yamaha rider midway through the race, bringing Rossi and Marquez along with him.

In the end, it came down to a straight fight between Lorenzo and Marquez, with the latter making the most of the fastest lap of the race on the final tour to complete a thrilling victory.

Iannone, who swapped positions with Rossi on several occasions during the race, just edged the nine-time world champion to third.

Alex Rins proved untouchable in Moto2 as he recorded his second victory of the season with a comfortable 6.6s margin over Sam Lowes and Lorenzo Baldassarri.

Meanwhile, Aussie Remy Gardner claimed his best result of the season in 10th after charging from 28th on the grid.

Next Story Entries flood in for 2016 Aus GT Championship