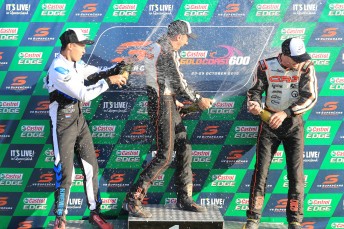 Five time world Karting Champion, Davide Fore took out his second successive Race of Stars at the Xtreme Karting complex at Pimpama despite grieving for his grandmother who passed away in Italy on Friday.

Fore was delivered the news just prior to qualifying on Friday and immediately left the circuit Saturday to be back in Italy with his family.

His drive was superlative and had to overcome Queenslander Kyle Ensbey who put together the performance of his long career to take it to the multiple World Champion. At times, the pair were side-by-side at 165kph, however not once did the CRG-mounted drivers touch.

Ensbey dropped behind Fore with three laps to go when the Italian decided to pull away. Ensbey was then surprised by Ricciardo Kart driver, Dutchman Marijn Kremers who ranged up on the inside of him to steal second on the final lap.

In the elite junior category, KF3 Victorian Oscar Piastri was the first driver home leading  Joshua Rogers across the line, just a tenth of a second splitting the pair. Aaron Cameron was third with Broc Feeney having his best KF3 race in fourth.

Emerald, Queensland based racer, Benjamin Finch took an emotional victory in the hard fought KA TaG class. It was his first major event victory that he dedicated to his father who passed away last year.  Luke Flynn worked his way forward to finish second just 0.021 behind the winner while Chris Farkas was third.

KA Junior provided one of the closest finishes in the history of Australian karting with the top three covered by 0.053 of a second. Thomas Davies was able to get the run on the front straightaway in his PIRTEK backed kart to eclipse Shamick Racing’s Joshua Smith and Tyler Everingham – the pair who were at the front of the race for the entirety.

The KA12 category for drivers between 9 and 12 delivered a tight finish between Jay Hanson and Kiwi Connor Davison. Davison pushed Hanson right to the line, the margin of victory just 0.026.

Oscar Comley staged a terrific through the field drive to finish in third position while Emerson Harvey and Thomas Cooper rounded out the top five.

In KA1, Bundaberg racer James Litzow made it another CRG victory after a terrific race.

Litzow led the race early however a skirmish with fellow CRG pilot, Brett Robinson allowed James Adams to establish a lead. Litzow cleared Robinson and then set about chasing down Adams. It took him until the final lap to make the decisive move and record a memorable victory.

Robinson was able to come home third, while in KA1 Masters – the race-within-the-race, Paul McNeil took victory over Perry Evans and Michael Dorman.