Ricky Capo has been named the provisional winner of the Australian Formula 3 Championship after a controversial finale at Wakefield Park.

Entering the weekend 19 points adrift of Jon Collins, Capo swept to all four wins at the Goulburn venue to secure a remarkable championship victory.

The result remains provisional, however, due to an ongoing dispute over a clash between the two title combatants in Saturday’s opening heat.

Today’s action proved somewhat cleaner, with Capo pulling successful moves on Collins for the lead in both of the afternoon’s 22 lap feature races.

The third race of the weekend had seen Capo pull to the outside of Collins at the final corner before out-dragging his rival to the line by just 0.018s.

“It’s an amazing feeling and I’m not sure I can believe we’re here,” said Capo after the winner-take-all decider. “It’s crazy and it’s such a great result for my family, my dad Frank, Carol my mum, my sister and everyone involved who has supported us this season.

“The third race was incredible and I didn’t know I’d beaten him until my engineer told me over the radio.. I couldn’t see as we crossed the line.

“I tried to pass Jon in the final race once and he closed the door but I had another go and was able to get through. From there I put my head down and went for it to the finish.

“It’s just an amazing weekend and I can’t believe it.”

Collins ended the year with the most victories, but fell eight points short of Capo in the provisional standings.

“It’s a bitter pill to swallow to lose the championship by the amount of points you lost in getting taken out,” Collins said.

“We have got to be proud of the efforts of this McDonald’s Gilmour Racing team this season. We had 10 wins, lots of pole positions and fastest laps and I’m really proud of what we have achieved.

“The team has done an amazing job. We did everything we could to win it but it wasn’t quite enough. In the end this weekend Ricky was just that little bit quicker.” 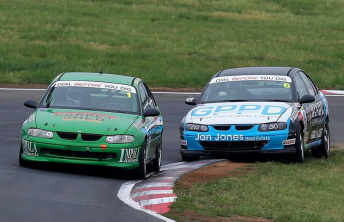 Ross and Grice battle it out in the Super Sixes

Ross finished second in all three of the weekend’s heats behind the in form Ben Grice, who extended his streak to 12 consecutive race wins.

Ashley Jarvis finished third in each of the three races to secure the final spot on the weekend podium amid a 11 car field.

The penultimate round of the Kerrick Sports Sedan Series was dominated by Jack Perkins, who took all three wins aboard John Gourlay’s Audi.

Tony Ricciardello scored second in the opening two heats before Thomas Randle, who retired from Race 1 with mechanical failure, demoted the Alfa to third in the final.

Ricciardello leads the standings on 464 points heading to the final round Sydney Motorsport Park next month, just 11 points ahead of Steven Tamasi. 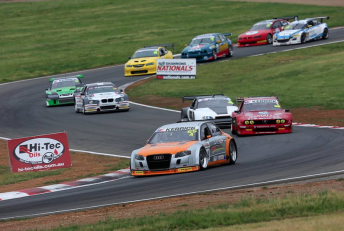 The theme of clean sweeps at Wakefield Park extended to the Formula Ford and Australian Manufacturers rounds, which were dominated by Cameron Hill and Rick Bates respectively.

After wrapping up the title on Saturday, Hill ensured he finished the campaign in fine style, securing his fourth win from six rounds.

Christian Morina secured second in the championship with the runner-up spot for the weekend, joined on the podium by team-mate Thomas Maxwell.

Just nine competitors took the start across the four classes. The season will conclude in Sydney on November 13-15.