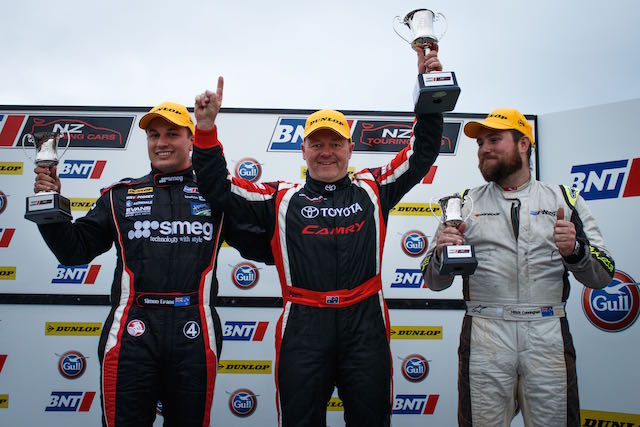 Bargwanna took the points lead following the opening round after winning the first race and finishing the tri-race meeting with a pair of fourth places.

“It was an amazing weekend. There was a lot of uncertainty leading into the event and I think we’ve proven that it is a very good championship that has a lot of potential,” Bargwanna said.

“On paper, the cars are pretty close. When you look at how the weekend panned out, three different race winners from three different teams, a TLX and a V8ST car on the podium, it’s pretty awesome.

“I’m especially proud of my team for getting the first round win.”

Craig Baird claimed the final heat win after opening with a promising fourth before suffering a DNF in Race 2.

In Race 2 Fullwood was sent into a spin on the exit of Turn 5 before he was then collected by an unsighted Nick Ross (Nissan Altima) and the Holden of Baird.

In class two, the weekend was dominated by Kevin Williams in his Holden Commodore after he won the first two races with Brock Cooley taking the final win.

Williams took the round win with Cooley in second and Brad Lathrope taking the final spot.

The meeting has seen SuperTourers, TLX and TL V8s run together after running separately as fierce rivals the last few seasons.