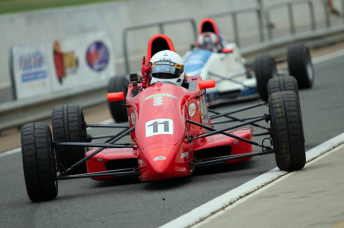 The first Formula Ford race of the weekend was run three hours later than scheduled after a crash brought out the red flags at the first attempt.

Eighteen-year-old Hill remained cool in the unusual circumstances, however, eventually recording a lights-to-flag victory ahead of Christian Morina and Jayden Ojeda. 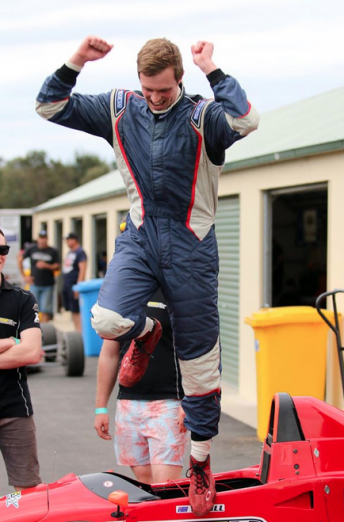 Hill up and about after his success

Among those in attendance to see Hill’s success was Alan Webber – father of Queanbeyan-raised ex-Formula 1 star Mark.

Hill is hoping to become the latest open-wheel success story from the region and will receive a two-day US F2000 test as a prize for winning the Formula Ford Series.

“Finally, the weight is lifted from the shoulders,” Hill smiled post-race.

“The pressure was on to stay consistent and do the job we need to do and we’ve finally done it. A whole year of hard work has paid off and I’m over the moon.

“They had to make it difficult for us! The tension was built up and then we had to re-set for the race again, but I just stayed calm and I knew all we had to do was finish and we went out there and did it.

“It’s really awesome to have such a supportive group of people around me like my family and my friends came out to support me this weekend. What we’ve achieved this year I’m very proud of and hopefully we can build on this form and look forward to the future.”

Elsewhere at the Shannons meeting, the Formula 3 title fight took a dramatic twist as Jon Collins and Ricky Capo collided in the closing stages of the weekend’s opening race.

Pole-sitter Capo lost ground with a stall at the start, before charging back through the pack to hunt down Collins as the race drew to its conclusion. 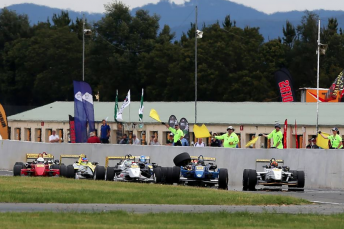 Rumble and Legge were early retirements in the opening F3 race

A move for the lead with less than three laps to go saw Collins dispatched into the sand trap, allowing Capo through for the provisional race victory.

Trent Shirvington and Shane Ryding completed the top three with Collins joining Dennie Rumble and Roland Legge – who collided at the start as a result of Capo’s stall – on the retirements list.

Randle’s recently rebuilt Saab stalked Perkins for nine of the 10 laps before the Saab broke a left-front ball joint and retired.

Perkins was left to take the flag 12 seconds clear of Tony Ricciardello’s Alfa, with the Holden Calibra of Steven Tamasi in third. 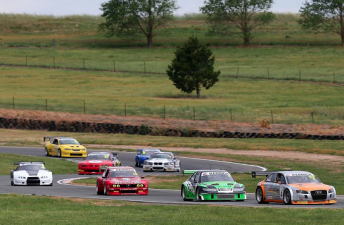 Perkins showed his class in the Sports Sedans

Just seven of the 11 starters saw the chequered flag, with Bob Pearson’s Evo the first to fall foul of mechanical trouble after just two laps.

The Super Six Touring Cars completed the day’s program and saw Gavin Ross edge closer to the title with a second place finish behind the in-form Ben Grice.

Grice started from pole position and led every lap to take the chequered flag five seconds clear of his rival.

A full day of racing action will complete the penultimate round of the Shannons Nationals season tomorrow.