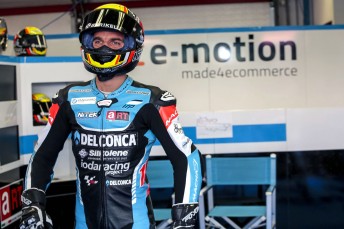 Injured MotoGP rider Alex de Angelis will be moved to a hospital in his native San Marino to continue his recovery.

The 31-year-old has been receiving treatment in Dokkyo University Hospital for an intracranial bleed, fractured ribs and vertebrae and a lung contusion sustained in a heavy crash at the Japanese Grand Prix last week.

Initially administered in a critical condition, de Angelis’ condition has improved with doctors now claiming he is fit enough to be transferred to a San Marino hospital within the next 10 days.

“After eight days of hospitalisation in the intensive care unit at the Dokkyo University Hospital of Mibu, doctors have deemed Alex de Angelis “fit to fly”, read a statement from MotoGP.

“The confirmation on the clinical improvement of the San Marino rider was also given by Clinica Mobile MD. Michele Zasa, who is attending Alex De Angelis in Japan.

“Preparations are in progress to transfer Alex De Angelis to San Marino, where he will be admitted to the State Hospital to receive the necessary medical care. De Angelis is expected to return to San Marino within the next 10 days.

“Team e-motion Iodaracing joyfully welcomes the positive news on their teammate and thanked the doctors at the Dokkyo University Hospital, the rescue unit of Motegi and the medical staff at the circuit, the Clinica Mobile and MD. Michele Zasa, as well as Dorna and IRTA for the huge help that was given to Alex De Angelis in these difficult days.”

Australian Damian Cudlin has been drafted in by the Ioda team to replace de Angelis at this weekend’s Australian Grand Prix.