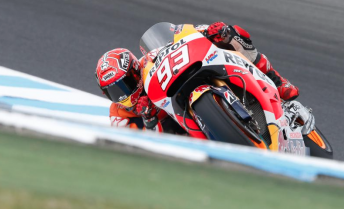 Marc Marquez converted his practice pace into an emphatic pole position for the Australian Grand Prix.

The reigning world champion set a blistering time from the outset as he became the first man into the 1:28s bracket at the Phillip Island circuit.

His initial lap held sway until the dying minutes when the Honda rider lowered his benchmark to a scorching 1:28.364s effort.

Dani Pedrosa appeared to be heading for a spot on the front row until the dying seconds when he was demoted to fourth ahead of LCR Honda’s Cal Crutchlow and Suzuki’s Maverick Vinales.

Championship leader Valentino Rossi struggled for outright speed which left the nine-time world champion to settle for a spot on the third row in seventh.

The Queenslander had impressed in practice but the LCR Honda rider was unable to find the pace required to break into Q2 despite producing a series of hard charging laps.

Alex Rins claimed pole position in Moto2 from Axel Pons and Alex Lowes, while Aussie Josh Hook was 24th in the session.

Although Kent will start from seventh after receiving a six place grid penalty for riding slowly on the racing line.

Remy Gardner, son of 1987 500cc world champion Wayne Gardner, was the best of the Australians in 26th spot, while Olly Simpson and Matt Barton will occupy the final row of the grid in 35th and 36th respectively.

Gardner injured three fingers in an accident during qualifying but is expected to fit enough to start Sunday’s race.

The 17-year-old has since been hit with a three place grid penalty for ‘irresponsible riding’ during Free Practice 3.

Barton also suffered a crash but is understood to have avoided injury.