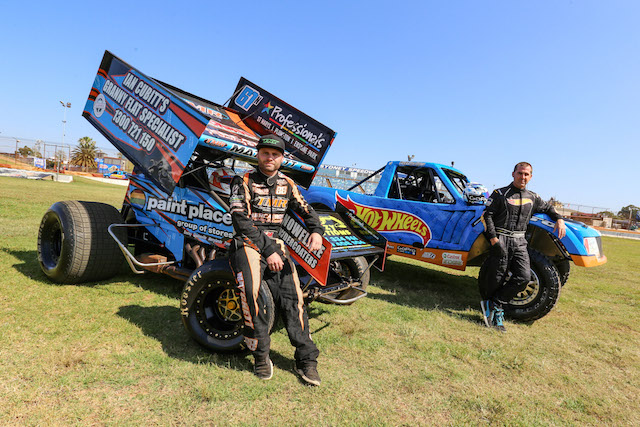 The second leg of Robby Gordon’s Stadium Super Truck event has been transferred to Valvoline Raceway at Granville in western Sydney.

Originally scheduled to be held at Sydney Olympic Park’s Spotless Stadium, the Super Trucks will now run on the same program as the Ultimate Sprintcar Championship on October 31.

The speedway venue, formerly known as Parramatta City Raceway, has undergone a major transformation which has seen it the subject of a $2 million capital works program.

A combination of dirt jumps and ramps will see the myPlates Stadium Super Trucks compete on a unique circuit on the infield.

According to organisers, the venue switch had been made to accommodate sprintcar fans who were originally disappointed they would miss out on the trucks due to the clash of dates.

“We had fans who were desperate to come to see the Stadium Super Trucks and Ultimate Sprintcar fans who were disappointed they would be missing their Saturday night fix, so it made sense to put them both together,” Geoff Jones from TEG Live, the event promoter, said.

“To be honest, we had not considered the Valvoline Raceway as an original venue, but more and more people kept telling us what a transformation has occurred at the place thanks to the new ownership.

“After we checked out the venue and had talks with managing director, Steven Green, it was clear that both parties wanted to make something happen.

The 10-strong field of Super Trucks will arrive in Sydney after competing at the Castrol Gold Coast 600 V8 Supercars event from October 23-25.

Valvoline Raceway was established in 1977 and has played host to some of the world’s speedway greats including USC legend Max Dumesny, who has won Australian Championships in both Sprintcars and NASCAR, along with the King of the Outlaws Steve Kinser and modern day icons like Donny Schatz.

Robby Gordon will lead the team of international Stadium Super Truck drivers, who are keen to get one over their Australian combatants.

“The response we have had to what we are doing at Valvoline Raceway has been fantastic and we are bringing people back to speedway racing,” Steven Green said.

Tickets for the night will start at $40 and public transport will be available to the Clyde and Granville Stations with a shuttle bus running directly to the venue’s front gate.

myPlates Stadium Super Trucks fans around the world will be able to tune into the event through Valvoline Raceway’s online video streaming service, which will cost $29.99 for the night.