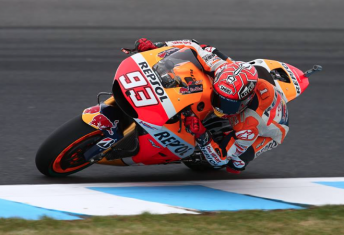 The Honda rider saved his best until the dying moments of the second 45 minute practice session as he posted a 1:29.383s effort under sunny skies at the Victorian circuit.

A damp track greeted the riders following the morning’s rain affected opening practice, but as the session progressed the circuit dried out.

The factory Yamaha of Jorge Lorenzo, who topped Practice 1, led the majority of the afternoon session before a flurry of quick times emerged as riders pitted for fresh rubber.

In the end Lorenzo finished in second spot just 0.050s adrift of Marquez, while Suzuki’s Maverick Vinales claimed third after impressing through the speed traps.

Andrea Iannone was fourth quickest on the works Ducati ahead of LCR Honda’s Cal Crutchlow, who shot to the top of the times in the final five minutes, before slipping down to fifth spot.

Australian Jack Miller impressed throughout practice after finishing fifth in the tricky wet conditions in Practice 1.

The 20-year-old LCR Honda managed to haul his Open class machine into the top 10 in Practice 2 before sliding to 11th position at the chequered flag.

Practice continues to tomorrow ahead of qualifying which begin at 1510 local time.