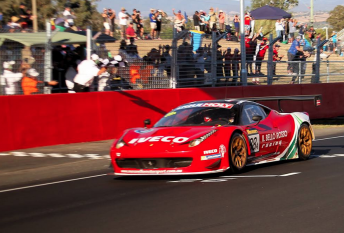 Maranello and Ferrari took victory in the 2014 B12H

Ferrari Australasia will have a major presence at next February’s Bathurst 12 Hour, with up to 100 of the Italian road cars expected to descend on Mount Panorama.

The news is the first official sign of new event owner V8 Supercars’ plans to grow the 12 Hour into a Goodwood-type automotive festival.

Planning is underway to see Ferrari road car parades take place through the centre of Bathurst and on the circuit during race week.

Other activities will include corporate hospitality for customers and static trackside displays of classic and new Ferrari vehicles.

A fleet of 458 GT3s are again expected to compete in the 12 Hour itself, including that of 2014 race winners Maranello Motorsport.

“The Bathurst 12 Hour is a fantastic opportunity for Ferrari to engage with our customers but also fans of the brand who follow the racing scene so closely,” said Herbert Appleroth, CEO of Ferrari Australasia.

“We will be putting on an event that is uniquely Ferrari and we are hoping that more than 100 customers will come to the Mountain with their vehicles to enjoy the weekend and one of Australia’s fastest growing events.

“Driving on the Bathurst circuit is a once in a lifetime experience. Most of our owners have grown up dreaming of conquering the myth that is Bathurst.

“We would love to see as many of our Australian customers get to the track to join and Ferrari fans everywhere trackside to see the Ferrari teams try and win again – in racing cars based on what we sell for the road.”

Liqui-Moly Bathurst 12 Hour Director John Casey says the Ferrari engagement will appeal to both the marque’s customers and fans.

“Ferrari teams have already had great success on track at the Bathurst 12 Hour and next February we’re looking forward to filling Bathurst with all kinds of Ferrari models, which will be a sight fans in town for the big race will enjoy.

“Their customers will get to experience and enjoy one of Australia’s quickest growing motorsport and motoring festivals, and then watch the Ferrari teams push for victory in the race itself.”