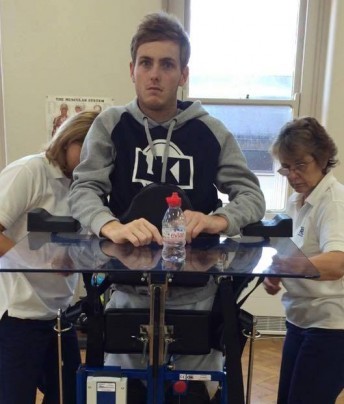 Australia’s seriously injured speedway rider Darcy Ward has been assisted to his feet in hospital in England for the first time since his horrific crash in Poland two months ago.

The inspirational star was pictured in hospital being supported by a special apparatus for spinal cord victims.

Boosted by an outpouring of support from thousands of fans, Ward is making headway in his recovery although his exact prognosis remains unclear.

Ward has commenced hydrotherapy sessions this week after making his first public appearance at Wimborne Road in Poole, UK, last week for a fundraising event organised by his British club, Poole Pirates.

Addressing the crowd in a wheelchair, Ward paid an emotional tribute to the fans and support network of family and his partner for their support throughout his ordeal.

Specific details of his spinal injuries have not been disclosed following the crash in Poland which saw him undergo a 2.5 hour operation.

With the Speedway Grand Prix World Championship coming to a climax at Etihad Stadium in Melbourne next weekend, the event will also pay tribute to the Queenslander.

Meanwhile a fundraising meeting where a number of Grand Prix stars are expected to attend will be conducted at Gillman Speedway in Adelaide on November 7.