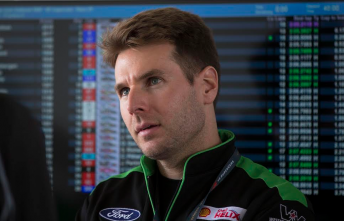 Will Power at Bathurst

Will Power expects the expanded DJR Team Penske operation will shake-up the V8 Supercars establishment in 2016 and emerge as a championship contender.

As a conscientious observer of proceedings at last weekend’s Supercheap Auto Bathurst 1000, Power says Penske is just starting to hit its stride.

DJRTP confirmed on Tuesday that it will field a second car next season with Scott Pye remaining in the #17 seat and Fabian Coulthard joining the squad in a #12 Ford.

Power, Team Penske’s most recent IndyCar Series champion in 2014, says he has followed the machinations of his American employer’s 51 percent buy-in of the V8 squad closely this season.

“The team has come on strong which I knew would be the case,” Power told Speedcafe.com.

“They don’t sit around for too long and run at the back.

“I really feel as though next year they will be a championship contender.

“I can just see they are just hitting their stride now.

“It’s (DJRTP) got the Roger Penske influence there. Everything he does he does properly and it’s all well presented.

“That’s the respect that he demands.”

Power said his appearance at Bathurst has whetted his appetite to have another crack at the Great Race.

His only appearance at Bathurst was with Mark Larkham in 2002 when the pair finished 18th in the Orrcon Ford before his international open-wheel career took off.

The 34-year-old was close to doing a deal this year with Lucas Dumbrell Motorsport for the trio of Pirtek Enduro Cup races, before a sponsor commitment in the United States ruled him out.

There was also consideration given earlier this year for Power to combine with IndyCar team-mate Juan Montoya if DJRTP entered a Bathurst wildcard.

“As soon as I drove into this track (Bathurst) I thought ‘man I wish I was racing’,” Power said.

“It would be great to be in a position to have a shot at winning this race (Bathurst) one day.”

Power said Montoya has the credentials to transition successfully into a V8 Supercar.

“He’s pretty adaptable given that he’s gone from IndyCar to F1 to NASCAR and back to IndyCar he seems to pick it up pretty quickly,” said Power.

“We were talking about doing it (Bathurst), Montoya and myself if there had of been a second car there, but they wanted to focus on getting that one car right.

“I guarantee you Juan would be good in a V8.”