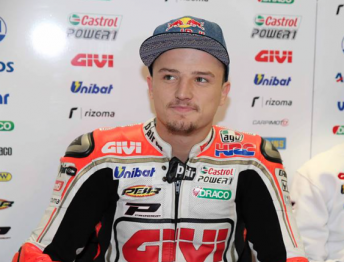 Jack Miller will move to the Marc VDS Racing organisation for the 2016 MotoGP campaign.

The announcement arrives on the eve of his home event at Phillip Island with the 20-year-old Queenslander now set to line up alongside Moto2 world champion Tito Rabat next year.

Miller’s destination for 2016 had been uncertain after his current team LCR Honda indicated it would run only one bike for Cal Crutchlow next season.

The Australian made the step up to MotoGP’s premier class this season after landing a three-year contract with Japanese giant Honda following his impressive 2014 Moto3 campaign.

Miller had been linked to a move to Marc VDS last year which led to a contract dispute between the two parties.

“I am very enthusiastic on this possibility with Honda and the Marc VDS Racing Team,” said Miller.

“I know Marc VDS is a good, strong and experienced team, and they can build a good structure for me to fight for good positions next year.

“As we both have already one year of experience from the top class, I feel that we can gain from the experiences we have to achieve good results together with Honda.”

Marc VDS boss Michael Bartholemy is pleased to finally welcome Miller to the fold having been following the rider’s progress since 2013.

“We wanted Jack in 2013 because we could see he had the talent to succeed and that hasn’t changed.

“This was always going to be a difficult transition season for him, having jumped straight onto the MotoGP bike from Moto3, but he’s done a solid job so far.

“Next year Jack will benefit from having the Marc VDS Racing Team behind him and, together with a competitive bike, I’m confident that this is exactly what he needs to realise his full potential.”