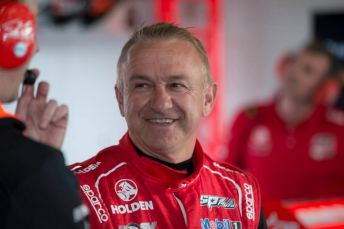 Russell Ingall has emerged as a surprise candidate to replace Chaz Mostert at Prodrive Racing Australia for the Castrol Gold Coast 600.

Speedcafe.com understands that the 51-year-old has been in talks with the Ford squad to co-drive the #6 Falcon alongside Cameron Waters.

Ingall competed at Sandown and Bathurst for the Holden Racing Team in place of James Courtney, who is preparing for a return to action on the Gold Coast following his own two-month injury lay-off.

Regardless of Courtney’s fitness, Ingall is understood to have no formal deal with the HRT, leaving him free to take up any offer from Prodrive.

Ingall’s recent race miles and Fox Sports role makes him highly desirable to the team, which has had to scramble for a substitute following Mostert’s season-ending accident at Bathurst.

Should a deal with Ingall not come off, other drivers understood to have been in contact with Prodrive include Craig Baird and Steven Johnson.

Penske IndyCar star Will Power was initially approached for the drive but is unavailable due to testing duties at Phoenix. “We’ve been fortunate enough to have a lot of drivers come forward offering their services,” a Prodrive spokesman told Speedcafe.com.

“We’re aiming to finalise our plans for the co-driver by no later than this weekend.”

Following the Gold Coast, Dunlop Series regular Waters is set to take over from Mostert when the single-driver events resume at Pukekohe in early November.

As well as backing up Mark Winterbottom’s quest for a maiden V8 Supercars drivers’ title, Waters’ performances will play an important role in Prodrive’s bid to win its first V8 Supercars teams’ championship.

Prodrive has meanwhile confirmed that the chassis campaigned as the Supergirls entry at Bathurst will be used as the #6 Pepsi Max entry from the Gold Coast onwards.

Mostert’s previous car, which debuted at the start of the season, was destroyed in the 50g impact at Forrest’s Elbow last Friday.

The team is meanwhile repairing its Super Black Ford for Gold Coast duties after it met the concrete at Hell Corner early in the race.