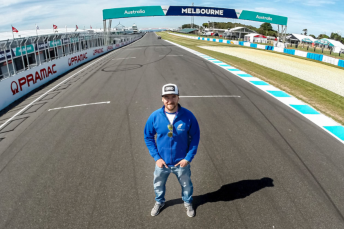 Experienced Australian motorcycle rider Damian Cudlin has been drafted in as a replacement for the injured Alex de Angelis at this weekend’s Australian Grand Prix.

The 30-year-old from Blacktown New South Wales has received a late call up after regular rider de Angelis was ruled out of the event with serious head, rib, back and lung injuries sustained in a crash at the Japanese Grand Prix last Saturday.

Cudlin will bring a wealth of experience to the Ioda Racing Team having regularly competed in the FIM World Endurance Championship, while making six MotoGP starts for Paul Bird Motorsport and Pramac Racing.

The New South Welshman made his last MotoGP start at Valencia in 2013.

The announcement will see three Australians compete in the premier class at Phillip Island with Cudlin joining LCR Honda rider Jack Miller and Queenslander Ant West, who will replace the injured Karel Abraham at AB Honda.

“First and foremost, I want to wish Alex De Angelis a full and speedy recovery from his injuries,” said Cudlin in a team statement.

“It was a nice surprise for me to receive an offer from Team e-motion Ioda Racing, although, if I’m honest, I was a bit hesitant to replace Alex under these circumstances – but after hearing the positive news of Alex’s recovery progress, we agreed to do it and I couldn’t be more excited to be riding in MotoGP again.

“Obviously, it won’t be easy for me and I’m not expecting any miracles. I just want to do the job that I’m there for- give the team good feedback, try and stay upright, and get us to the finish.

“I really want to thank the Team e-motion Ioda Racing for the opportunity and I can’t wait to throw my leg over a MotoGP bike again.”