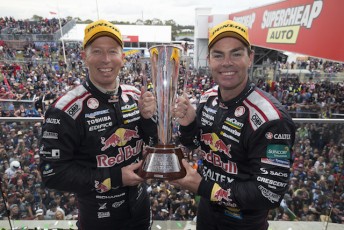 The evergreen Steven Richards has declared intentions to continue in the Pirtek Enduro Cup for ‘another 10 years’ following victory alongside Craig Lowndes at Bathurst.

The 43-year-old Richards claimed his fourth Great Race win on Sunday and is showing no signs of slowing down four years on since his full-time V8 career came to a close.

Richards’ career longevity is following in the footsteps of that of his father Jim, who won the last of his seven Bathurst crowns as a 55-year-old in 2002.

“I love driving and work hard to do it and as long as there is a place for me I want to be able to do it in the best teams if I can,” Richards told Speedcafe.com post-Bathurst.

“I work hard putting together my other race program to make sure I am fit and able and in condition to come to Bathurst and do that.

“I still feel like a 21-year-old. I’d like to think I could do it for another 10 years and be competitive but time will tell.”

Richards is currently in his second enduro campaign with Red Bull following his headline grabbing decision to leave Prodrive after seven years of service.

Heading into Bathurst Richards and Lowndes had recorded only two top 10 results in five races with their highest finish of fourth achieved at Sandown last year.

Richards says he never doubted his switch to Red Bull and is hopeful he will keep his seat alongside Lowndes next year.

“I’d love to be there (next year) for sure, I think we make a pretty good team,” said Richards.

“(There was) never any doubt. You don’t stand up with the best team in the current era in Australian motorsport and think you are never in contention.

“I’m a guy that likes to challenge myself and reset my goals.

“After seven years at FPR I really loved the guys and am close friends with a few of them, but from a professional standpoint I needed something new.

“I’m rapt. I really feel like I have taken the right opportunity and made it work for me and this (Bathurst 1000 win) is a culmination of that.”

Lowndes and Richards have emerged as one for the most experienced combinations to win the Great Race with a combined age of 84.

Between them the pair have clocked up 45 starts at the mountain culminating in 10 victories.

Next Story Burgess: HRT must take pride from podium