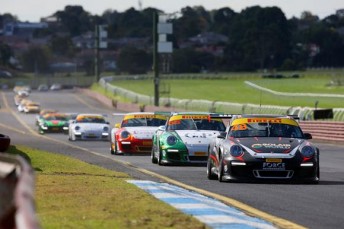 The Porsche GT3 Cup Challenge has confirmed a six round calendar for the 2016 season which includes the Porsche Rennsport festival.

The series will begin on the Shannons Nationals program at Sandown Raceway from April 1-3 before featuring on the bill for the second running of the prestigious Porsche Rennsport meeting (April 29-May 1) at Sydney Motorsport Park.

Winton will host the third round in June which also marks the start of the three round Jim Richards Endurance Trophy element of the series.

The competition will be contested over the following rounds at Sydney Motorsport Park and Queensland Raceway.

Phillip Island is the venue for the final round of the series from September 9-11.

“We aim to continue this trajectory throughout 2016 and securing such a strong schedule for next season help us to do so.

“We’re certainly looking forward to the series’ return to the Rennsport event. The all-Porsche festival was a genuine highlight in the 2013 season and GT3 Cup Challenge will again, along with Carrera Cup, be a key drawcard of the on-track racing schedule.

“For Porsche, GT3 Cup Challenge is a crucial element to our motor racing program and we are planning another exciting, entertaining and enjoyable season ahead for our teams, drivers, families and series partners.”