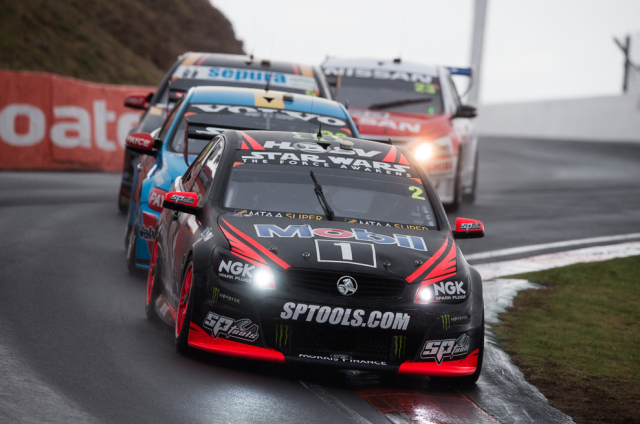 The Tander/Luff Commodore cutting through the mid-race gloom

Holden Racing Team boss Adrian Burgess says his team can be proud of its efforts at Bathurst, despite being out-gunned by fellow heavyweights Red Bull and Prodrive.

Garth Tander cut his way through from eighth to third in just two laps after the final restart to score the HRT’s first Bathurst podium since its last win in 2011.

The result came after a mid-qualifying rain shower left the Tander/Warren Luff and Jack Perkins/Russell Ingall Holdens to start 22nd and 17th respectively. 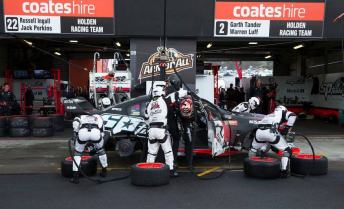 Pre-event attention on the HRT had earlier been heightened by a major Star Wars promotion and the last minute confirmation of star driver James Courtney’s continued absence.

“We go racing to win, but as a team we have to be happy with third,” Burgess told Speedcafe.com.

“Bathurst is a tough bloody week as everyone knows and so many people have hard luck stories at the end of it. To go from 22nd to third with GT and Luffy was a good result.

“It’s a good reward for the guys to finish on the podium. We didn’t have the quickest car but I think we did a decent job with it. You always want more, but we probably got all we were capable of.”

Tander’s late charge was the subject of much praise post-race, including from his boss Burgess.

“When you’re in that position, who else would you have in your car?” he said.

“First laps, Safety Car restarts…. when the elbows are out his car placement is second to none.

“He’s fantastic and that’s why he drives for us. It’s just down to us to give him a little bit better car.

“We were behind Frosty (Mark Winterbottom) and could have had a crack at him but just ran out of steam on that final set of tyres.

“The car balance had been a little better on the set before. We just didn’t quite have enough left in the tank to get to him.”

Luff described the final stint as “the most nerve wracking of my life”, while Tander gave a typically straight-shooting assessment of his run to the flag.

“A couple of gaps opened up so I put my nose in and left it there. You take your chances in the last stint,” he said.

“The car was tapped. I tried about 100 different ways to try and achieve a faster lap time but it would only do a 7.7. It wasn’t quite quick enough to catch Frosty at the end.” 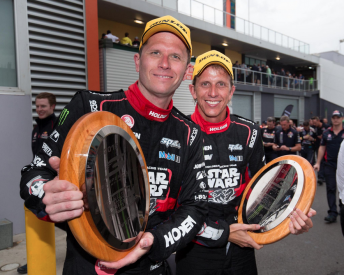 Tander and Luff with their third placed trophies

Having trailed the Perkins/Ingall entry for the majority of the day, Tander had found himself in a similar position to Jamie Whincup when the Safety Car was called as the final stops approached.

While Whincup ignored instructions to pit and subsequently illegally overtook the Safety Car, the HRT told Tander to take the risk of staying out.

“Every team was dreading that moment and discussing internally what they were going to do,” reflected Burgess.

“As normal, we were right at the point of telling one engineer that they had to stop because they were exposed. It always comes at that point.

“We had the discussion, do we send the second car around? It was a big risk (of getting caught behind the SC), but we elected to send GT around.

“He got held up behind the Safety Car briefly until they waved him past and then got on with it. Ultimately he didn’t lose a position, so it worked out not too bad for him.”

“That was the only chance we had of keeping in the game because if we double-stacked it was game over,” added Tander.

“When the Safety Car came out I thought we were screwed. The boys were ‘umming and aaaring’ and we just rolled the dice and went around again.

“We lost a fair bit of time, we had to be pretty careful across the top and behind the Safety Car.

“I have to thank young Nicholas (Percat, two laps down but ahead of Tander on the road). He did the right thing and kept the speed up when we got clear of the crash zone.

“We were damned if we came in and double-stacked so it was worth going around and seeing what happened. In the end it was no net loss, no net gain. For us it was a win there.”