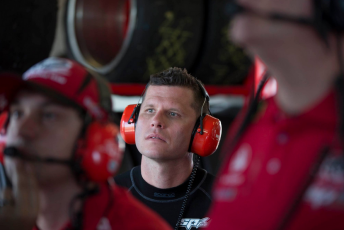 Although Reynolds has been widely condemned for the ‘loose’ comment, the severity of the fine was the subject of much debate in the V8 Supercars paddock across the weekend.

Several rival team members anecdotally told Speedcafe.com they had offered Reynolds money to pay the fine, while a friend of the driver started a crowdfunding appeal on GoFundme.

The GoFundme page, which has been promoted by Reynolds’ high profile partner Tahan Lew via Facebook, has so far attracted over $3,500 from 111 different donors.

“I see a new trend in crowd funding V8 Supercars drivers fines is emerging,” wrote Tander on his own Facebook account this morning.

“As a still active driver I don’t agree with it and wouldn’t accept the offer. Most drivers are paid well above the average Australian salary (in most cases 5/6 times above – some more!. Do the crime, pay the fine.

“If fans don’t agree with a fine levied at a driver, that crowd funding should go to an appropriate charity and the driver remain responsible for paying their fine. Just my thoughts….”

Reynolds hit back at the ‘do the crime, pay the fine’ comment via Twitter, posting a video of Tander pushing the Michael Caruso/Dean Fiore Nissan out of the way during Sunday’s race. 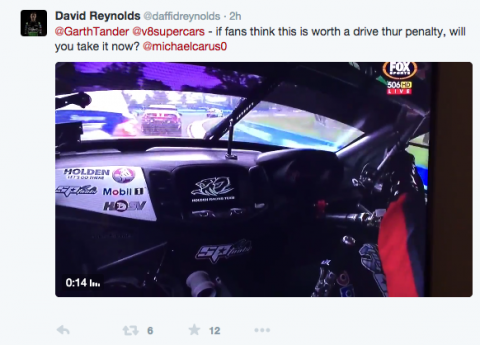 Reynolds is understood to have requested that his fine be paid to a female-orientated charity.

While V8 Supercars delivered Reynolds’ fine within hours of the comment taking place, Prodrive principal Tim Edwards says that the team will discuss the matter internally this week.

“It’s not something that we wanted to deal with at the circuit,” Edwards told Speedcafe.com.

“We had a race to win. V8s took their action, so now we’ll go back to base and talk about it with him.”

Edwards described both the press conference comment and a reference to ‘pad changes’ in pitstops made by Reynolds earlier in the day on radio as ‘poor form’.

“If you’re talking among your peers in a pub or garage or something like that, you can be a little bit more loose with what you say,” said Edwards.

“But to make those sort of comments in public on radio and at a media conference is not smart. It’s just poor form.

“We were quite proud to be running that female entry. We stepped up to the plate because we thought it was good for us and good for the sport. I think it was wrong that he made those comments.”

The incident came amid uncertainty over Reynolds’ future with the team, which also has Dunlop Series standout Cameron Waters on its books.

“We’re still working through that,” added Edwards of Reynolds’ future.

“There’s a number of factors to weigh up. Nothing is determined as yet.”

Reynolds, who scored pole position and finished sixth in Sunday’s race, later described Bathurst as ‘the toughest week of my career’, revealing that he had been in tears during the pre-race parade lap.

UPDATE: The GoFundMe campaign has this afternoon been removed at the request of Reynolds, who has confirmed via Facebook that he will personally pay the fine in full.

“I am aware of a crowd funding account on the internet set-up by some fans in relation to the fine I received at Bathurst from V8 Supercars,” he wrote.

“I have contacted the individuals involved several times to remove it and as of today it has been shut down.

“I am currently working with V8 Supercars to arrange for part of my fine to be donated to an appropriate organisation.

“I take full responsibility for my comments at Bathurst, accept the sanction and will be personally paying my fine.”