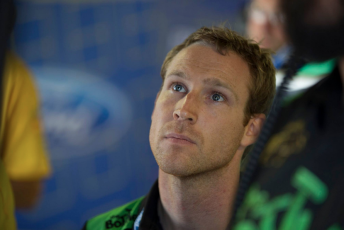 Headline-maker David Reynolds has admitted that the rollercoaster he rode at Bathurst spelled the toughest challenge of his career.

Reynolds managed to claim sixth in the Supercheap Auto Bathurst 1000 alongside co-driver Dean Canto after spearing to a pole position.

The Melbourne-based racer admitted to being in tears during the driver’s parade lap while acknowledging support from the fans.

Reynolds received a $25,000 fine last week for his now infamous ‘pussy wagon’ comment in reference to the Ford which run under his Prodrive Racing Australia stable for Renee Gracie and Simona de Silvestro.

“Especially when you look next door with Chaz (Mostert) in hospital and a written off car (Mostert’s #6 Ford).

“It’s probably the toughest week I’ve ever had to go racing with.”

Reynolds said that the trials and tribulations within the PRA outfit had placed a heavy burden on his shoulders, affecting his ability to work with his engineer.

“All this stuff probably did detract from my focus on the car set-up,” Reynolds said.

“I didn’t have time to spend with my engineer sorting out issues.

“What made it a lot easier for me was the crowd.

“Everyone said what they thought and the support was amazing.

“On the parade lap everyone was yelling and screaming what I said. They were saying the ‘magical words’.

“I was in tears the whole time, they had signs and everything. I have never felt anything like that.”

Both Reynolds and Canto admitted that their car had been deficient in mid-corner speed, consequently hurting its exit speed from the crucial first and last corners at Mount Panorama.

Reynolds took the final restart in third place but was demoted to sixth when Fabian Coulthard dived down the inside and pushed The Bottle-O Ford wide.

“You had to concentrate 110 percent to get every corner right,” Canto told Speedcafe.com.

“If there was a miscalculation of one or two kay too fast at the last corner and the first corner… that’s why everyone kept jumping us.

“That’s why Fabs (Coulthard) screwed us over into Turn 1 there and cost himself a podium as well, smart move. That was never on.”