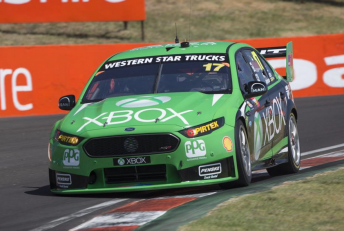 While Fabian Coulthard’s move to DJR Team Penske had been an open secret for months, the squad’s expansion to two cars has come as a welcome post-Bathurst shock to the battered and bruised Scott Pye.

According to Team Penske president Tim Cindric, the decision was made in the wake of the squad’s Bathurst campaign, which saw a promising run end with a heavy late-race crash for Pye, induced by a steering failure.

Despite performing solidly since stepping into the void left by Marcos Ambrose in March, Pye had appeared to be on the outer with Coulthard’s impending arrival.

The youngster is currently recovering from the Bathurst crash, which left him briefly unconscious and with bruising to his chest and foot.

“I didn’t have any idea,” said Pye when asked for his knowledge of the team’s future plans while at Bathurst.

“I guess the Bathurst weekend really for me, I wasn’t going out to prove a point, I was just trying to do the best job for everyone.

“I dearly would love to have won the race, but we showed all weekend we had great speed.

“It (staying with the team for 2016) has really come as a big surprise to me and has certainly made me feel a lot better after that big hit on Sunday.

“It’s an exciting opportunity that I’ve been given again.”

Running at least two cars since 1988, Dick Johnson Racing was trimmed back to one amid the Team Penske takeover, with its second Racing Entitlements Contract leased to Super Black Racing.

The final call to expand came ahead of this week’s REC entry deadline for the 2016 season, which Cindric admits has forced the team to commit to two cars without full funding in place.

“Our decision was really made between Sunday night and Monday,” explained Cindric following widespread speculation that an expansion was not on the cards.

“It’s really down to what we thought we could do to compete at the front and obviously there’s always the commercial aspects of it.

“We feel like we’ve been able to make some progress on that, but it’s really a matter of understanding if we thought that we were in a position to go forward in a way that we could compete at the front or if we needed to spend more time as a one-car organisation.

“I think what we saw on Sunday is that we can run up the front, we just need to race better. We certainly think that we’re in a position now to go to the next step.

“Obviously Roger (Penske) had to weigh in on that and see that for himself through the last few events, but to do that on the biggest stage, it was very important for us to do well that weekend and I think Scott showed every session that we were there up the front.”

“There’s a lot of work to be done on that front,” he added of sponsorship.

“Certainly the deadline coming forward prompted us to make decisions earlier than we would have liked to be honest. But at the end of the day it will be better for us that we did.”

Cindric added that the two-car commitment comes after seeing promising signs of development from both the team and the category.

Roger Penske’s interest in V8 Supercars was sparked during 2013 as the American business giant took on trucking interests in Australia.

“It certainly shows that we’re here to stay,” Cindric continued.

“I think there were some questions about how committed we were as an organisation and what are overall plan was when we went back to a one-car team when DJR had been a two-car team for so long.

“There was a lot of scrutiny on what we were doing, but as we said all along, it’s a long term plan that we want to build a good foundation that is solid in the beginning.

“We felt like it was the right time and the right opportunity with Fabian.

“It’s a home run for us as long as we see progress in our own racing team and in the series.

“I think we’ve certainly seen that and Bathurst is a testament to that when you look at the numbers and attendance and enthusiasm around that event.”