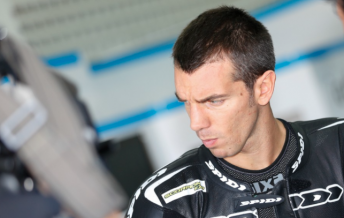 MotoGP has confirmed that injured rider Alex de Angelis remains in a critical condition but is now able to communicate after having his sedation reduced.

The 31-year-old is being closely monitored in Dokkyo Medical University Hospital following a heavy crash in practice for the Japanese Grand Prix, which left the rider with an intracranial bleed, fractured ribs and vertebrae and a lung contusion.

De Angelis underwent further tests yesterday on his injuries which revealed his intracranial bleed has not worsened while his lung injury is improving.

The Ioda rider will undergo another CT scan to evaluate his condition within the next two days.

“On Monday, De Angelis had a head and chest CT scan, which reassuringly showed that the intracranial hematoma he suffered was unchanged while the contusions to his lungs are slightly resolving,” read statement from MotoGP.

“The rider remains in a critical condition but as his sedation was reduced, he was able to talk and oriented in time and space.

“He’ll undergo a further head CT scan in the next 48 to 72 hours to ensure the intracranial hematoma is stable while the conditions of the lungs will need further evaluation.”