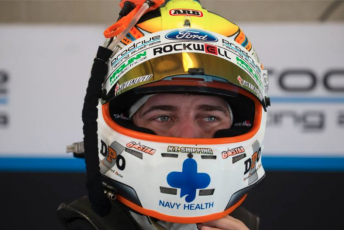 Injured Prodrive Racing Australia driver Chaz Mostert will undergo another operation in Orange Base Hospital tomorrow to repair ligament damage in his knee.

The ligament damage was discovered during post-surgery scans earlier today.

The 23-year-old said via his Periscope account that he is aiming to return to the track for the Clipsal 500 from March 3-6.

“I’m having another operation tomorrow to repair some ligament damage,” Mostert said on Periscope.

“It’s a setback but hopefully I will be out of hospital by the weekend. The knee is going to have another op tomorrow but getting back to healing is probably the biggest thing.

“I’d rather get it all done now and get it all fixed than having to go back later on.”

PRA are yet to confirm his replacement for the Castrol Gold Coast 600 to team with Cameron Waters or who will be in the #6 Falcon for the remaining solo rounds at Pukekohe (November 6-8), Phillip Island (November 20-22) and Sydney (December 4-6).

“I’m not sure who the team will put in but I’m hoping Cam (Waters) can get some good miles under his the belt and it will be good for the team’s championship as well.”

Surgeons inserted a pin in his left femur on Saturday morning after his sickening Friday qualifying shunt in the run to Forrest’s Elbow. Mostert also has a broken left wrist.