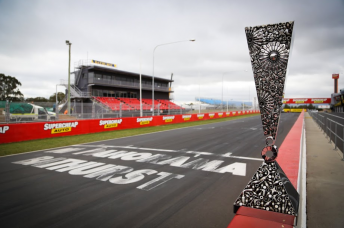 Mark Winterbottom is on course to score a Pirtek Enduro Cup and V8 Supercars Championship double after extending his lead in both points standings at Bathurst.

Prodrive duo Winterbottom and Steve Owen go into the final two Pirtek Enduro Cup races at the Castrol Gold Coast 600 leading the standings after a win at Sandown and a second at Bathurst.

Kiwi Shane van Gisbergen and Jonathon Webb sit a further 50 points back in their Tekno Holden, despite a tough run at Bathurst.

The Red Bull team won the inaugural Pirtek Cup in 2013 through Lowndes and Luff with the Brisbane squad going back-to-back with Jamie Whincup and Paul Dumbrell last year.

The original Pirtek Cup was crafted by world-renowned automotive artist James Corbett and the perpetual trophy, which has been crafted from Pirtek fittings and stainless steel.

It is housed in a purpose built road case, which was designed and built by the Red Bull team.

A two-third scale replica of the Pirtek Cup is created by Corbett each year and remains a permanent fixture in the winning team’s trophy cabinet after they have handed the main trophy back.