Wayne Russell ‘the proudest father in the world’

Wayne Russell ‘the proudest father in the world’ 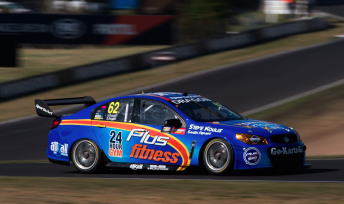 Novocastrian Motorsport owner Wayne Russell has expressed his pride after sons Aaren and Drew finished 17th and on the lead lap in the Supercheap Auto Bathurst 1000.

The minnow outfit ran steadily throughout the weekend aboard their wildcard entry, which was put together with the help of Garry Rogers Motorsport.

The duo eventually finished ahead of 2012 Great Race winners Jamie Whincup and Paul Dumbrell after the #1 Red Bull Commodore was penalised for passing the Safety Car.

“Ending up with a result with 17th on the lead lap after 161 laps of Bathurst, go figure – that’s pretty huge,” beamed Wayne, who made three Bathurst 1000 starts during the 1990s.

“The boys I thought drove unbelievably well – when you look at our sector times we didn’t have a lot of track position but we actually had sector times that were matching people.

“The boys were driving with the kind of thought ‘drive to survive’, trying not to do a thing wrong, just make it work, and they did.

“But when they were getting pressured from other cars and everything else, they stepped it up and made it happen. I’m the proudest father in the world.”

Aaren and Drew, the former currently 13th in the Dunlop Series and the latter having stepped down from the second tier due to financial constraints in 2013, echoed their father’s sentiments.

“We’re such a small team with nowhere near the budgets of anyone up and down pit lane so to finish on the lead lap is such a proud moment for everybody,” said Aaren.

“To finish on the lead lap is massive,” added Drew. “It’s pretty much like a win for us.

“I don’t think there’s a scratch on the car, so that’s a positive thing for us, I don’t think it could have ended any better.”

There were concerns for the entry when the Plus Fitness car began to blow smoke with just over 30 laps remaining, which turned out to be the result of the Commodore being over-filled with oil at a pit stop.

Wayne hopes that the achievement will lead to bigger and better things for his sons, who have been continually overlooked for co-drives in the Pirtek Enduro Cup.

“We’ve done this this weekend to try and fly the flag for the boys,” he said.

“Everyone told us they’d get co-drives if they did a Bathurst – we’ve now done Bathurst, gives the boys a break.”

Aaren now sets his sights on the final round of the Dunlop Series at Sydney Olympic Park from 4 to 6 December.