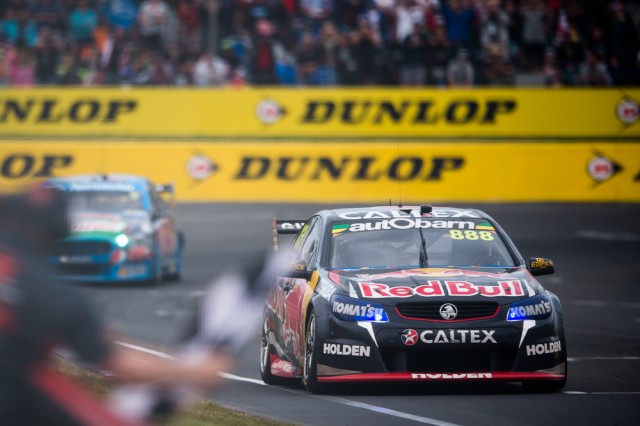 The 41-year-old, partnered by Steven Richards, had the measure of the all conquering Prodrive Falcon FGXs at Mount Panorama, finishing ahead of title rival Mark Winterbottom to claim a sixth Great Race triumph.

Red Bull showed a significant pace improvement at Bathurst with Lowndes’ efforts backed up by team-mate Jamie Whincup, who dominated much of the 161 lap classic, while also clocking a stunning 2:04.9s lap record in practice.

Although proving the squad has taken a step forward in car speed, Lowndes, who moved to second in the championship, feels the title is still in Winterbottom’s hands.

Lowndes, lying 399 points adrift of Winterbottom, acknowledged the performance increase, but fears Prodrive will bounce back at the Castrol Gold Coast 600.

“We knew at Bathurst we would be in better shape in the speed comparison,” said Lowndes.

“To have a three second lead on the last lap is a luxury I have never had before.

“We will see now how we perform at the Gold Coast.

“That is more of a stop and squirt circuit and we still think the Falcons have got better drive off the corners so maybe Gold Coast might turn it around again.

“For us it (the championship) is still a possibility but it is a long shot. Frosty is very consistent and fast and it will need a DNF maybe two to have a chance.”

Lowndes’ Bathurst victory has further asserted his claim as the number one driver in the Red Bull outfit this season, with Whincup’s 18th place Great Race finish, following a penalty, severely denting his title defence.

Firmly in the hunt for a fourth championship, Lowndes isn’t expecting Whincup to assist his title bid in the season run in.

“At the end of the day I have still got to qualify at the front and don’t expect him (Jamie) to move over (in races),” added Lowndes.

“We have still got to do our job. We have to make sure we close the enduro season out on a high and have a good run home.”