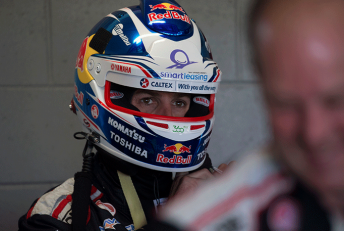 Jamie Whincup has accepted full responsibility after a late race penalty for passing the Safety Car cost him a shot at a fifth Bathurst 1000 victory.

Whincup misread a call which ultimately saw him illegally pass the Safety Car going up Mountain Straight as the critical final pitstops were unfolding.

The six-time V8 Supercars champion was contrite post-race, explaining that he did not want to dampen the jubilation on the other side of the Red Bull garage after Craig Lowndes claimed his sixth Bathurst title.

“I’m personally pretty gutted with my performance, I made an error at the end of the race and got a drive through penalty,” Whincup told Speedcafe.com.

“l saw Lowndesy pull off in front and I thought the team had made an error and pulled both of us in the same lap, so I elected to stay out.

“Then I came past the last corner and saw the Safety Car board. I thought ‘oh I’m in trouble here’.

“I went up Mountain Straight expecting to stop behind the Safety Car and then he ‘green lighted me’.

“So I thought ‘happy days, get-out-of-jail’. But they decided to give me a drive-through.

“I wouldn’t have passed it if there were orange lights on but he green lighted me.”

Whincup had rejoined from his final stop in second behind Lowndes, but was handed the drive-through immediately after the race restarted.

Mark Dutton, the team manager and Whincup’s race engineer, said the evidence that his driver overtook the Safety Car with its orange lights on was ‘damning’.

“We were getting very close to when we were going to stop anyway,” Dutton told Speedcafe.com.

“We’ll have to have a look at the in-car but the footage we saw was pretty damning.

“He came up to pull in behind the Safety Car and saw the lights were green and thought ‘I’ve been gifted this one.’

“He looks away and motors on. At some point they had the green lights on and waved the #7 car through.

“So they had the green lights on for that, then they flicked it over when he’s not looking because he’s committed to the corner. No excuses, he should look but he was sure it was green.”

Whincup’s co-driver Paul Dumbrell was gracious in his summation of the incident, saying it was just another tale in a litany of Bathurst hard luck stories.

“This day has got so many tails of trepidations throughout its history and we were just another one today,” Dumbrell said.