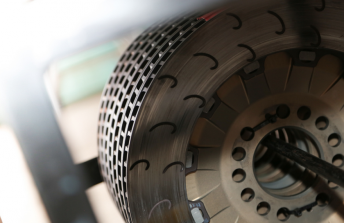 V8 Supercars teams will be keeping a close eye on their brake discs in today’s Supercheap Auto Bathurst 1000 amid concerns over a faulty batch of the control product.

Several squads have reported cracks in the AP Racing supplied discs during the lead-up sessions at Mount Panorama.

Inspections by the British-based company revealed that a machining error has caused a thinner than standard cheek thickness throughout an entire batch of the discs.

The suspect batch has been supplied exclusively to teams since August, meaning the majority of teams will be running them in today’s race.

The batch in question was fielded at the Sandown 500 without issue, while AP Racing conducted an emergency Bathurst race simulation on its dyno yesterday, also without problem.

Bathurst’s unique loadings and temperature extremes, however, are said to have triggered the issues and leave teams to closely monitor the situation throughout the 1000km race.

Red Bull Racing Australia suffered cracks on two of its discs during practice and have subsequently borrowed previous stock from Brad Jones Racing in order to minimise the risk.

“What’s been seen up and down pitlane this weekend is far from ideal,” Red Bull engineer Grant McPherson told Speedcafe.com.

“They have only been small cracks but if you had that crack at the 200km mark you would be concerned.

“I think we’ve put every measure in place. If we have an issue it’s up to the motorsport gods now.”

Teams are geared up to do quick brake pad changes during the race, but are unlikely to be able to replace discs under green flag conditions without losing a lap.

Two pad stops is the standard option for the 161 lap contest, although teams may elect to do more in order to protect the discs.

“We had one (disc crack) but it was an old one that had already had a lot of cold starts and thermal peeking.

“We’ll have our eye on it as everyone will, but we’re not overly concerned at the moment.”

Teams have been instructed to carefully manage their brake warm-up procedures and operating temperatures in the race, as well as to check for cracking during each pitstop.