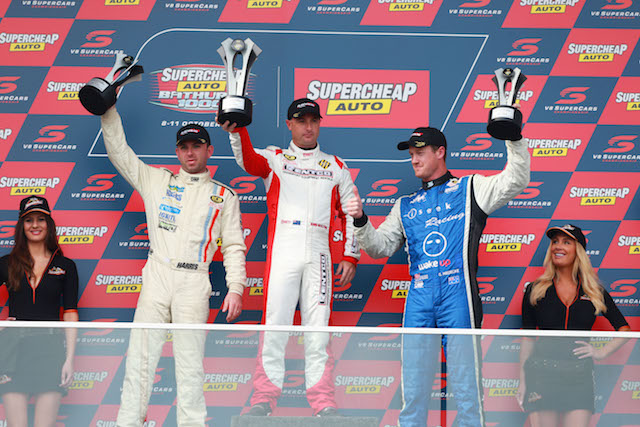 Kris Walton has survived a nervous finish to take out Race 3 and the round honours in the East Coast Bullbars V8 Utes at Mount Panorama.

Walton, who led the field away, carried a big lock-up into the Chase on the final lap but managed to catch his Rentco Falcon and just beat Ryal Harris to the chequered flag.

The margin from Harris to third-placed George Miedecke was even closer at less than two tenths as Miedecke sought to attack the series leader with the field bottled up.

Adam Beechey and Mason Barbera were nevertheless the major talking point when the former shunted the wall after contact between the two exiting Forrest’s Elbow on Lap 2.

Barbera had made a run on Beechey but was squeezed onto the infield grass on the inside of a three-wide group also involving Jeremy Gray.

The 17-year-old became involved in his second major accident in as many meetings when he appeared to stay on the throttle and make further contact with Beechey which set the #15 Commodore into a spin.

Beechey made heavy front and side contact with the outside wall, bringing about the safety car and consequently a single lap green flag run to the finish.

Rhys McNally and Nathan Pretty completed the top five, Adam Marjoram finished eighth, and David Sieders worked his way up to tenth having nearly found himself involved in the Barbera, Beechey incident.

The Australian V8 Ute Racing Series continues on the Gold Coast from October 23-25.

John Bowe won the final race and the round overall in Enzed Touring Car Masters.

The two-times Bathurst 1000 winner led out of Hell Corner for the first time and held his nerve for the seven lap distance despite being stalked by Steven Johnson.

Johnson looked particularly quick across the top on the final lap, but couldn’t find a way past the Holden Torana.

Eddie Abelnica ran a lonely third after passing Brett Youlden on the opening lap, while Jim Richards took fourth having also got by the Pro Am class driver on Lap 4.

Bowe’s two race wins to Johnson’s one gives him a third round win of the season, moving just five points behind series leader Jim Richards despite missing the Symmons Plains round.

The title will be decided when the final round is held at Phillip Island from November 20-22.