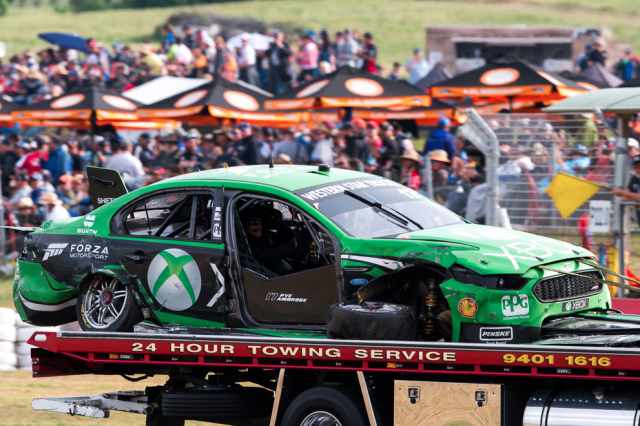 Scott Pye’s wrecked Falcon is trucked back to pitlane

Scott Pye has been cleared of serious injury following his crash in the closing stages of the Supercheap Auto Bathurst 1000.

The 25-year-old was taken to Orange Hospital by road after initial assessment at the circuit’s medical centre left fears of broken ribs.

Momentarily knocked out in the heavy crash at Sulman Park, Pye had been seen holding his side after climbing out of the DJR Team Penske Ford.

The team has confirmed via a brief social media update that Pye has been cleared from hospital and “is sore and bruised but no broken bones.”

“I’ve been cleared of any serious injuries, which is great news,” wrote Pye via his own Facebook page.

“A banged up right foot and an injured chest will leave me sore for a while.

“So stoked on all the kind words and support, it’s much appreciated.”

It is suspected that a broken steering arm caused the Falcon to understeer into the outside wall through the fast Sulman Park dip.

Pye and co-driver Ambrose had been among the front-runners all day and were 11th at the time of the crash.

Ambrose had held his own among the co-drivers during his first Bathurst in 10 years.

“I enjoyed my return to Bathurst,” Ambrose reflected post-race.

“I did a double stint in the dry and held position pretty well. I was back in the Xbox Falcon when the rain came and had to do those extra laps to get my minimum laps up.

“I had lost some time when we were stuck out on there with badly worn wet tyres on a drying track. We lost some track position with wet tyres that were way past their best.

“Overall it was our best weekend of the year in terms of car speed, so there is a lot to take away from here. The team has done a great job getting the car to this level.”